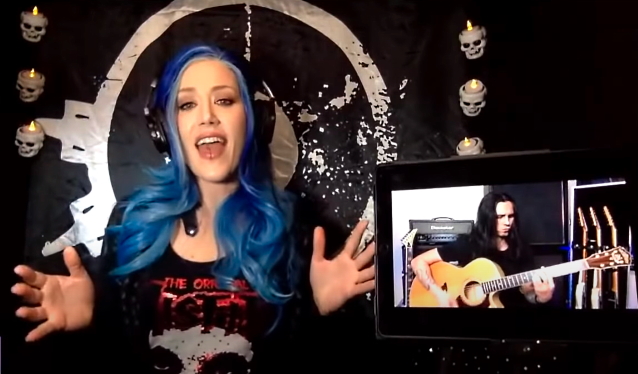 On April 17, ARCH ENEMY singer Alissa White-Gluz and former OZZY OSBOURNE guitarist Gus G. took part in a performance on Crowdcast as part of the #TogetherAtHome series, fueled by Global Citizen and in support of the World Health Organization. You can now watch the performance below.

Gus G., who is the leader of his own band FIREWIND, was the touring guitarist for ARCH ENEMY on the 2005 edition of the Ozzfest traveling festival. He later told Russia's Darkside about the experience: "It was definitely a step up in my career. I got a chance to go to America and play on the biggest tour with BLACK SABBATH and IRON MAIDEN. It was a dream come true. It was amazing, and I learned a lot from the guys in ARCH ENEMY. Michael Amott is a professional, and I learned a lot working with him, his management and the guys in the band. They're all very good friends of mine, and I will not forget this. It was an amazing experience."

FIREWIND's ninth, self-titled studio album will be made available on May 15.

In the fall of 2018, Amott revealed that he had commenced the songwriting process for the follow-up to ARCH ENEMY's "Will To Power" album. Released in 2017, that disc marked the second ARCH ENEMY album since the departure of longtime singer Angela Gossow and addition of White-Gluz. It was also the first ARCH ENEMY disc to feature former NEVERMORE guitarist Jeff Loomis, who joined the band in late 2014.