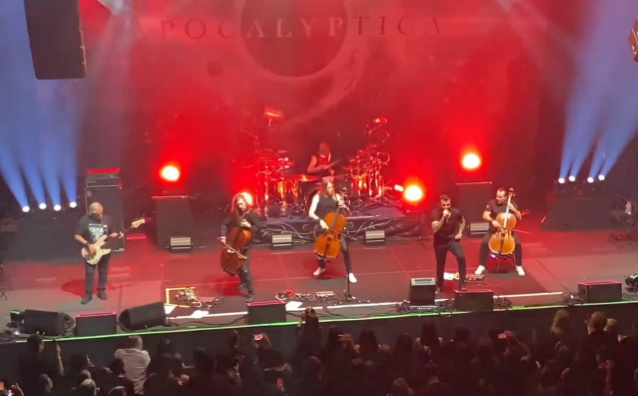 BLACK SABBATH bassist Geezer Butler joined the Finnish cello rock quartet APOCALYPTICA and singer Franky Perez — guest vocalist on APOCALYPTICA's 2015 record "Shadowmaker" — on stage this past Tuesday (October 4) at Brooklyn Bowl in Las Vegas, Nevada to perform the SABBATH classic "War Pigs". Video of his appearance can be seen below.

Butler and Perez, who both live in Las Vegas, were the featured musicians on APOCALYPTICA's "I'll Get Through It" single, which came out earlier this year. The song was written for the band by American award-winning songwriter Diane Warren. The collaboration was born out of a visit Geezer and Franky paid to their friend Diane, who had already written the track "Not Strong Enough" for APOCALYPTICA, included in their 2010 record "7th Symphony".

"Franky and I were visiting my friend, Diane Warren, at her studio," Geezer commented at the time. "She played us this song, saying that she thought it would work well with Franky's voice. He gave it a try on the spot. We loved it. Franky then suggested sending it to APOCALYPTICA. They loved it, and the rest is history."

"I'll Get Through It" marked the first collaboration between APOCALYPTICA and Perez since he sang on "Shadowmaker", which added to the excitement for the members of APOCALYPTICA, according to Perttu Kivilaakso. "We are more than thrilled working with our great and talented friend Franky Perez again!" he said.

Perttu also added about the song: "'I'll Get Through It' is a meaningful and beautiful song by an incredible songwriter Diane Warren, with whom we've also had the pleasure of working with before. We can't wait for you to hear the final result… falling in love again with Franky's sensual performance, Geezer's earthshakingly powerful bass, and our wistfully haunting cellos, among the inevitable presence of all the rhythms and groove!"

Prior to enlisting Perez, the group released eight albums that melded the classically trained cello mastery of the three core bandmembers with the harder elements of the rock world, including drums and guest vocalists, such as Gavin Rossdale from BUSH, and Corey Taylor of SLIPKNOT and STONE SOUR fame.

So geezer Butler showed up for Apocalyptica 

Apocalyptica pulled out all the strings… like having Geezer fucking Butler come out and play Sabbath with them!! You...