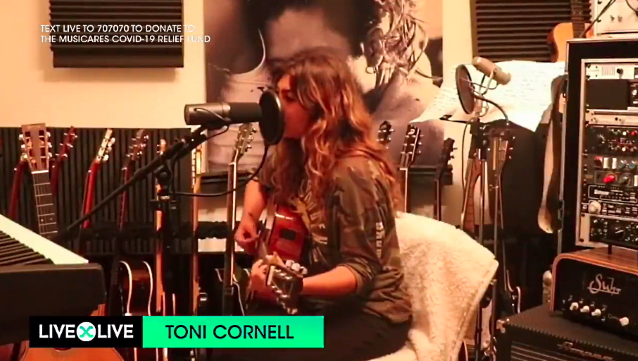 Chris Cornell's 15-year-old daughter Toni Cornell performed an acoustic cover version of TEMPLE OF THE DOG's "Hunger Strike" from her father's home studio during LiveXLive's "Music Lives" global digital music festival, which is being held April 17-19. Check out video of her appearance below.

"Music Lives", produced by LiveXLive, featured more than a hundred artist and celebrity appearances and 48 hours of live entertainment in support of MusiCares COVID-19 Relief Fund.

"This event is about discovery for young artists who are really going to struggle in this environment as much as it is about the established artists," said LiveXLive's chairman and CEO Robert Ellin. "We want to support the music community and part of that means working with amazing distribution partners like Facebook's Oculus Venues, Complex Media, and our presenting partner, TikTok, to reach as many music fans globally as possible and to raise funds for MusiCares."

Accessible on the web as well as on devices from the car to home, LiveXLive brings music fans the best seat in the house for festivals, concerts and events worldwide, a curated by people audio selection of millions of recorded songs, original programming segments comprised of live performances, podcasts, artist interviews, lifestyle segments, and show pilots. LiveXLive operates a live events business and offers branded entertainment, content development, advertising, merchandising, and livestreaming services.