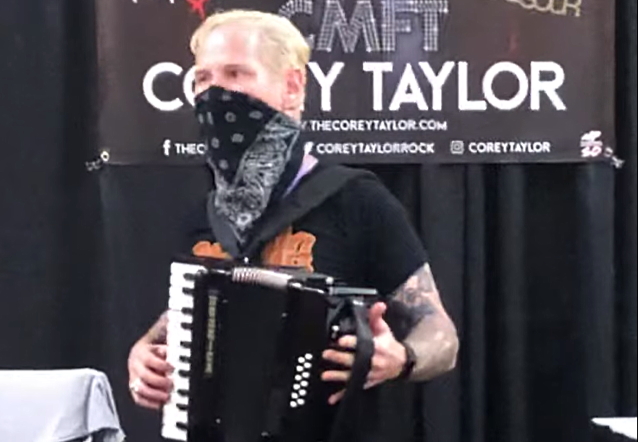 SLIPKNOT and STONE SOUR frontman Corey Taylor took time out from signing autographs at the Spooky Empire convention at the Wyndham Orlando Resort in Orlando, Florida on Friday, April 30 to take a stab at playing the accordion. Fan-filmed video footage of the moment (courtesy of YouTube user "Kaylen Clay") can be seen below.

Spooky Empire is an American multigenre convention focused primarily on horror and science fiction. The convention, which is billed as "the dark side of Comic-Con", features vendors, a film and tattoo festival, music, and celebrity guests.

Taylor will embark on the "CMFTour" later this month. The trek will see Corey and his band performing for fans socially distanced and following state recommended health guidelines. Support on all dates comes from girl gang dance squad CHERRY BOMBS, led by Taylor's wife Alicia Taylor.

Taylor decided to launch this tour for a few significant and personal reasons. As always, he endeavors to deliver an unforgettable show for fans, but just as importantly, he recognizes the massive impact that the ongoing global pandemic has had on live music venues and touring crews alike. It upholds his staunch commitment to supporting live music and the industry surrounding it as illustrated last year through his popular eBay guitar auction, which raised $150,000 for COVID-19 relief, and his COVID-19 safe secret L.A. show benefiting Sweet Relief Musicians Fund — a 501(c)(3) non-profit healing musicians and music industry workers in need.

As for the show itself, Taylor and his band will run through anthems from his critically acclaimed solo debut "CMFT", choice cuts from his SLIPKNOT and STONE SOUR catalogs, and various covers and surprises. Additionally, CHERRY BOMBS will kick off each night of the tour with a high-octane, high-flying performance.

"It's the full shebang," Taylor told Rolling Stone about the tour. "The CHERRY BOMBS are gonna do their show, with fire and aerial and rock and all the good stuff, then me and the boys will get up and play for, like, two hours."

Regarding how the idea for the tour came about, Taylor said: "We'd been looking for opportunities to play here and there constantly, but it wasn't until a promoter friend of ours asked us how we would approach a tour with the kinds of safeguards we were interested in that we realized we could put a tour together. We'll be taking as many precautions as we can: the usual social distancing, pod seating (sectioned off area with an allotted number of people who came together allowed inside),temperature checks, waivers signed at the door, masks in place everywhere but your pod, etc. We're encouraging everyone to get vaccinated as well before the tour."

Corey Taylor came to hang out for a bit a Spooky Empire today!

Posted by Heather Reicher on Saturday, May 1, 2021

Posted by Reg Padgett Home Lender on Saturday, May 1, 2021

Posted by Hether Williams on Saturday, May 1, 2021 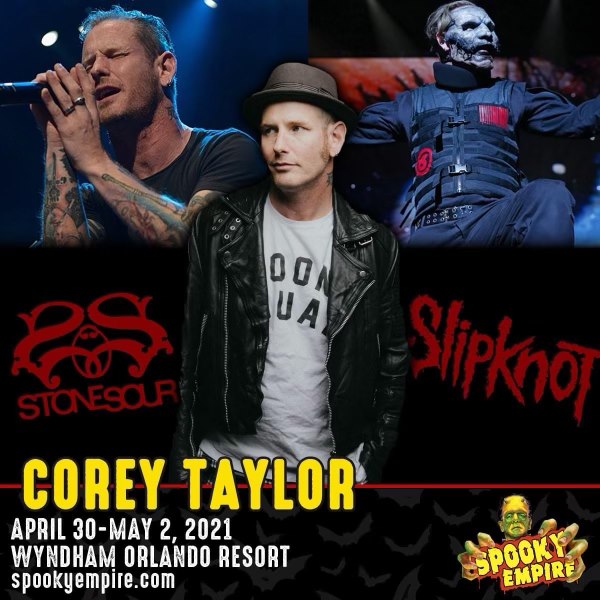