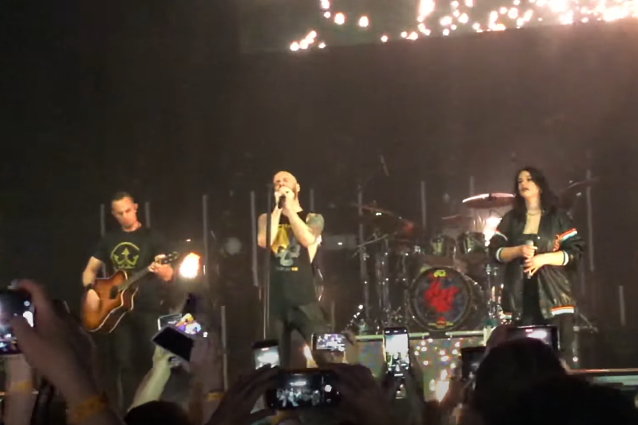 Watch: DAUGHTRY And MARK TREMONTI Pay Tribute To TAYLOR HAWKINS With Cover Of FOO FIGHTERS' 'My Hero' In New Orleans

DAUGHTRY was joined by Mark Tremonti (ALTER BRIDGE, TREMONTI) and Lyell on stage last night (Saturday, March 26) at Fillmore New Orleans in New Orleans, Louisiana to perform a cover version of FOO FIGHTERS' "My Hero" as a tribute to Taylor Hawkins. Fan-filmed video of the performance can be seen below.

Back in September 2018, DAUGHTRY frontman Chris Daughtry, a Season 5 "American Idol" finalist, told the Charlotte Observer that he texted FOO FIGHTERS frontman Grohl about going to a FF concert in San Jose that took place that month and Grohl actually invited him to come on over. Expecting only a quick meeting, Daughtry was surprised when Grohl invited him into the FOO FIGHTERS' dressing room where they ended up sending two hours talking about music and more.

"I'm, like, 'You guys have a show to put on, right?" Daughtry recalled. "You've been in here telling stories...for two hours plus and you've gotta go out and play now... How do you do this and walk out and still have a voice?' And [Grohl] goes, 'What better way to walk out on stage then after you've been hanging out with friends and laughing and having a good time? You're already in a great mood.'

"We usually hang out with our guests after the show," Daughtry explained. "It's always this 'quiet before the storm' for us in the hours before the show. So I think that was an interesting takeaway, that maybe we shouldn't take everything so seriously."