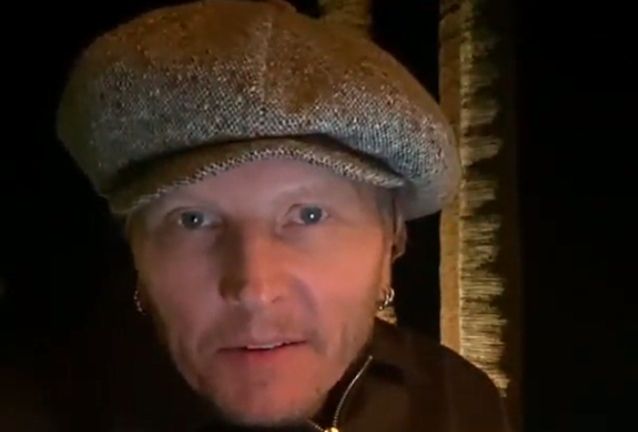 Former GUNS N' ROSES drummer has uploaded a video of him performing the band's classic song "Patience". The six-minute clip opens with Sorum telling his Instagram followers: "Here I am again with my guitar. I'm out in the backyard here in the desert. You see my palm trees. It's getting a little chilly, so I put on this wooly hat in tribute to Izzy Stradlin, one of the writers of this next song. I was very fortunate to play with my old bandmates on this song. Obviously, I was on the drums. I'm gonna play it for you tonight on the guitar and sing it. I hope you enjoy my version. This one's called 'Patience'."

As previously reported, Chicago Review Press has pushed back the release date of Matt''s book, "Double Talkin' Jive: True Rock 'N' Roll Stories From The Drummer Of Guns N' Roses, The Cult, And Velvet Revolver", to July 7 from the previously announced April 7.

Back in March 2018, Sorum told the "2 Hours With Matt Pinfield" podcast about his upcoming autobiography: "It's going to be the juiciest of the juiciest of the GN'R books, for sure, plus all the other crap I've done. I'm being really truthful about everything that happened. I'm not a jaded individual; I'm not a bitter guy. There's a lot of bad shit that went down, but I just want to tell the story straightforward, and I don't want to, like, hold back. I will edit some things — my wife's got to look at it. [Laughs] I've had such an amazing life, and I go, 'Wow, man. If I don't write it down now, I don't want to forget.' There's a lot of good shit in the book that doesn't pertain to GN'R."