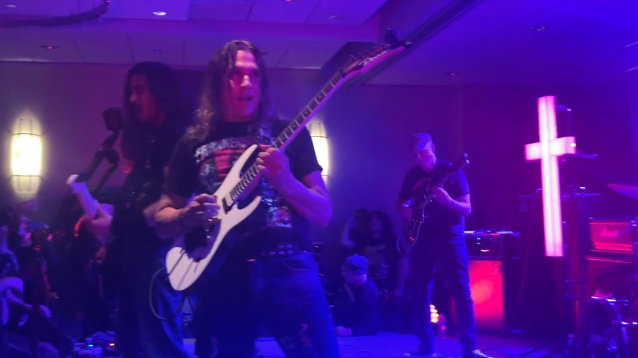 Watch: Ex-MEGADETH Members ELLEFSON, YOUNG And POLAND Perform At 'Days Of The Dead' Convention In Chicago

This past Saturday (November 19),KINGS OF THRASH, the new band featuring former MEGADETH members David Ellefson (bass) and Jeff Young (guitar),performed at the Days Of The Dead horror convention in Chicago, Illinois. Video of the concert can be seen below.

The group, which also includes drummer Fred Aching as well as guitarist/vocalist Chaz Leon, along with the occasional guest appearance by another former MEGADETH member, Chris Poland (guitar),recently entered the studio to begin recording the first of four original songs.

Last month, KINGS OF THRASH completed a four-date West Coast tour which culminated in a sold-out gig at the legendary Whisky A Go Go in West Hollywood, California. All four shows saw KINGS OF THRASH performing MEGADETH's classic albums "Killing Is My Business… And Business Is Good!" and "So Far, So Good… So What!" in their entirety.

Speaking to Ralph Rasmussen of Radio Bypass about KINGS OF THRASH's recent shows and future plans, Ellefson said: "That was a thing where… Of course everybody knew our names — me, Jeff Young and Chris Poland. We advertised we were gonna play the 'Killing Is My Business' and 'So Far, So Good… So What!' records. And as it turns out, we ended up playing, like, half of 'Peace Sells' too. That's probably the most frickin' muscular setlist I've played since probably [MEGADETH's] 'Rude Awakening' [live album and DVD], when we filmed that in 2001 and I was 20 years younger. So we turned up the gas; there was no screwing around on that one. And it was great. It was super cool. It was super fun. It made me just realize how cool those songs are, how the detail and intricacies… It was a very different era, too. The songs were written under much different pretenses. There was a real innovation in those records, the stuff of the '80s, back then, that we were doing."

He continued: "We picked four cities. We said, 'Let's just go out and fire this off, kind of a proof of concept, show everybody what we've got.' I think the first night, when we played in San Diego, the fans right away got it. They were, like, 'Oh my God. Holy shit. We've been asking for this and wanting this for years. And oh my God. There they really are. Those are really the guys that played on those records. This is it.' And our drummer Fred and our singer Chaz, they got it in their hear as younger guys, so they get it and were excited to be there with us doing it. So, yeah, it really was just a moment in time for that to fire off like that so well. And now as a result, look, we've got live recordings, we've got more stuff coming up here in the New Year for that. So, yeah, that was just the beginning; that was just the first firework we blew off. There's definitely gonna be more after this."

Last month, Young told Ghost Cult magazine that KINGS OF THRASH's first original song was being recorded at a North Hollywood studio previously used by legendary producer Eddie Kramer (Jimi Hendrix). As for the musical direction of KINGS OF THRASH's original material, Jeff said: "It's got the vibe of MEGADETH — it's on that playing field, but it's got all of its own stuff and all of our influences and some SOUNDGARDEN/TOOL vibes in maybe the music and melodies."

Jeff was also full of praise for Aching and Leon, saying: "We really feel in a way how Ozzy [Osbourne] must have felt introducing Randy Rhoads to the world with these young two guys we have, both half our age and both so composed and mature musically for their age. And we've just been having a blast. And it's great that they're fans of the music and they've really studied it. Chaz, the singer/guitar player, plays in a MEGADETH tribute and fronts a SOUNDGARDEN tribute. So he has some of that Chris Cornell huskiness… So it's really cool to hear him sing these songs with a bit more huskiness and that young exuberance that he has. I think the kids are gonna love him 'cause he has that Dimebag Darrell kind of likability."

In a separate interview with Thomas S. Orwat, Jr. of the Rock Interview Series, Young was asked if he, Ellefson and Poland have gotten any reaction to the tour — either in the form of a blessing or an angry rebuke — from MEGADETH leader Dave Mustaine. Jeff responded: "We're really not concerned. I don't pay attention. I haven't really paid attention or followed MEGADETH since, I think, I heard the 'Rust In Peace' album a couple of times, and then what you might hear on the radio or in the press.

"For us, this isn't about any spite or retaliation; it's a celebration of the music that we were all a part of, that we helped create," he explained. "And it's fun for us to do this.

"People said, 'You should do this.' And we said, 'Hey, yeah, you're right. We should do this.' It's a win-win — it's a win for us, and it's a win for [Mustaine], because any performance royalties, anything… If we did include live tracks, he would make money off that. It's promoting albums that hopefully fans will go back and buy, which is putting money right in his pocket. Especially 'Killing Is My Business', I think a lot of people are gonna go back and wanna rediscover that album after this tour.

"For us, it's all about positivity," Young added. "We're all in this moment — we're living in the moment, and we're not looking beyond. We're not reading any of the comments on Blabbermouth or any of the stuff. Because we know what our intent is, and intent is everything. And our intent's positive. We like playing together. We know we're crafting original music. We're not relying on this; we don't need to ride the coattails of this. This is just something that the fans wanted, and you wanna give fans what they want."

Ellefson told Yes! You CAN Play Guitar! that the intention behind KINGS OF THRASH is not to stick it to his former bandmates. "This is a celebration, not a retaliation," he explained. "This is a good moment. This is a happy moment, to celebrate these songs and these tracks and these records. So we go at it with just fun… It's, like, 'Wow. Wouldn't it be fun if we went out and played these records?' And we're doing it. So it's meant to be this celebration and bringing people together. And honestly, that was kind of always my role in MEGADETH. Dave [Mustaine] always called me 'The Ambassador', and I was always that guy, and I am that guy. So it's, like, let me just continue that role in our community and have one of good will."

Ellefson was fired from MEGADETH a year and a half ago after sexually tinged messages and explicit video footage involving the bassist were posted on Twitter.

Ready to rock Days Of The Dead!

At Days Of The Dead Chicago with rock icons David Ellefson, Jeff Young / Six-Strings Inc., and Chris Poland. I will be... 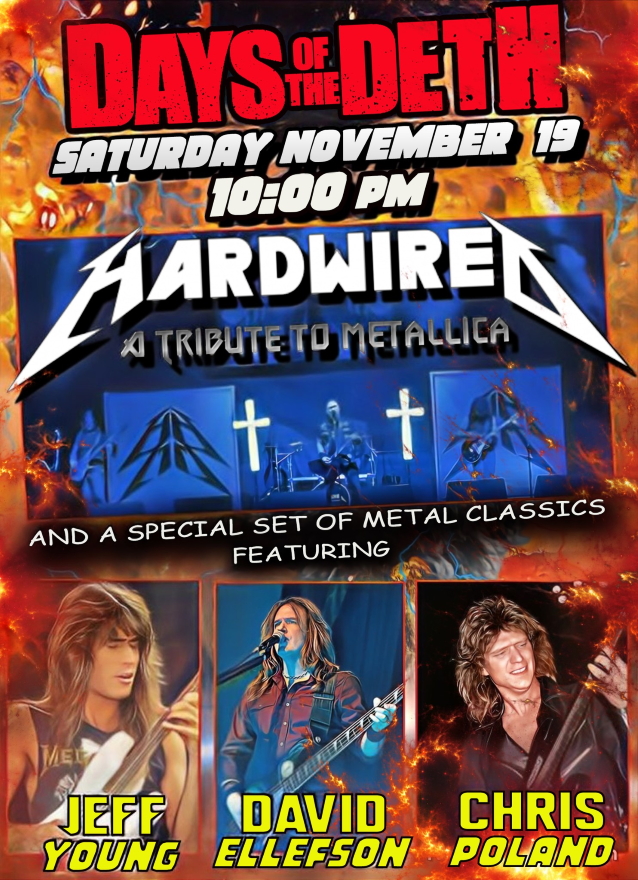