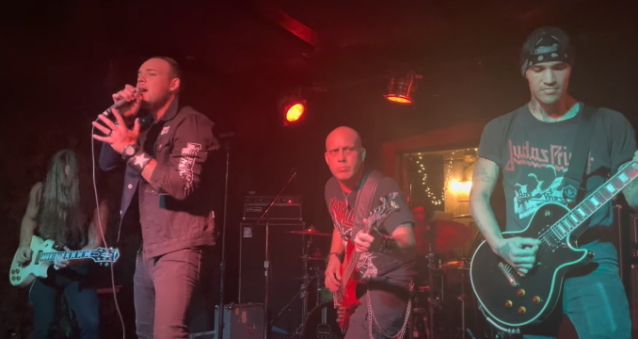 Former QUIET RIOT singer James Durbin played his first show under the DURBIN band banner this past Friday (August 26) at the Bottom Of The Hill in San Francisco, California. Joining him on stage at the gig were Dylan Rose (lead guitar), Mike Roberts (bass), Eric James Peterson (drums) and Moksha Hartshauser (rhythm guitar). DURBIN's setlist included a cover version of the JUDAS PRIEST classic "The Ripper".

"American Idol" finalist Durbin famously sang the PRIEST classic "You Got Another Thing Coming" on the March 1, 2011 edition of "Idol". His rendition marked the first time, according to AEROSMITH singer and then-"American Idol" judge Steven Tyler, where a JUDAS PRIEST single was performed on the "Idol" stage. Two months later, Durbin performed JUDAS PRIEST's classic songs "Living After Midnight" and "Breaking The Law" with the British heavy metal legends themselves during the "American Idol" finale.

A short time later, PRIEST singer Rob Halford told FoxNews.com's "Fox 411": "It's just amazing, it really is. We've gotta say thank you to James and to 'American Idol' for putting heavy metal music into 30 million American homes week after week. He's become a hero of ours."

Halford continued: "We had no idea that [James] was covering this song by PRIEST. All of us back in the U.K. and various locations around the world, our phones [were going off] with texts. 'Can you believe what's happening?' We were absolutely thrilled."

"James is epitomizing heavy metal, because it's the type of music that we've always had to fight for, really," added PRIEST drummer Scott Travis. "So the fact that he got eliminated quicker than some people wanted him to, and he's still around and he's probably gonna have a long career. And it's the same sort of thing we've had to deal with."

Five years ago, Durbin stepped into QUIET RIOT with a head full of ideas and the pipes to match. His stint with QUIET RIOT got off to a rocky start when he had to re-record Seann Nicols's vocals on 2017's "Road Rage". From there, Durbin never quite seemed like the right fit — no matter his vocal prowess and energetic stage persona. The vocalist left QUIET RIOT in September 2019, two months before his final studio album with the band, "Hollywood Cowboys", was released.

Durbin has since fared much better. Starting with last year's strong, pure-metal foray "The Beast Awakens", the singer proved capable of writing and performing his own material. His latest venture is CLEANBREAK, another in a long line of Frontiers Music Srl-created projects that brings together veteran hard rock and metal musicians. Paired with RIOT guitarist Mike Flyntz and the STRYPER pair of Perry Richardson (bass) and Robert Sweet (drums), their "Coming Home" debut keeps Durbin firmly planted in classic metal.

In a recent interview with BLABBERMOUTH.NET, Durbin was asked if he is now "a solo guy" or if he is going to be doing "bands" more frequently. He responded: "I don't really know. [Laughs] To be honest with you, I'm going with the flow. Professionally, everything I'm doing is with Frontiers. What I wanted to do after QUIET RIOT, which is kind of where I wasn't completely satisfied creatively, is that I really wanted to be creative and challenge myself. I wanted that outlet. I put out a record when I was with QUIET RIOT, 'Homeland', which is where I was at the time creatively and emotionally. I thought that was the best way to write the songs and showcase them as clean, Americana storytelling. After that, it was, like, 'Okay. I'm going to get my singer/songwriter shit out of the way. I was singing about it every fucking night: I want to bang my head. If I was a metal band, what would I sound like? What I was going to do was write an album with other people. Then I'd go, 'I'm not a metal songwriter or a riff writer. How can I do this on my own?' I was trying to line up sessions and then the pandemic hit. So, I kinda had no choice and I became a riff writer, which was fun. I really challenged myself songwriting-wise. After the DURBIN 'The Beast Awakens' album and into CLEANBREAK, this new chapter has really been defined by the age in which we're living in and the pandemic in which we've been experiencing. It really hasn't given me an opportunity to tour it. The album was released right in February or March of 2021. People were just starting to go out, the bigger bands. I'm also at the point where the most important thing to me is seeing my kids and watching them grow and being with my wife. I'm not super gung-ho to go on tour. Let me rephrase: I would absolutely love to go on tour. I would love to. If there was a tour booked and everything was in place and all I had to was get there and sing, that'd be amazing. It's not that easy. I opened myself to the universe and allowed opportunities to come to me. I put out a general idea of what I would like and worked towards that while letting things come to me. I haven't stopped working. I've been the busiest I've been playing pickup shows with other people; 'sideman' stuff, as I like to call it, and production and all sorts of things. To be able to make kick-ass records that I enjoy and 'The Beast Awakens' and the new CLEANBREAK record and beyond — I'm working on the follow-up to the "The Beast Awaken" now. I get so much enjoyment out of that."

Introducing the lineup for the First Ever - Live DURBIN Experience, this Friday at Bottom Of The Hill in San Francisco,...

San Francisco! August 26 at Bottom of the Hill with Durbin and NERD HALEN! James Durbin
Get your tickets now!