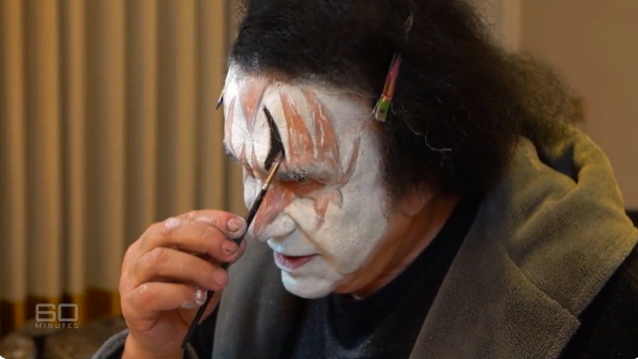 A video of KISS bassist/vocalist Gene Simmons applying the makeup on his face prior to the June 7 concert at AccorHotels Arena on the band's ongoing "End Of The Road" tour can be seen below. The clip is part of a report from Sarah Abo of Australia's "60 Minutes" who was invited by Simmons and fellow KISS co-founder Paul Stanley for a taste of their jet-set lifestyle and to show her how they’ve survived and thrived in a notoriously fickle industry.

In a 2016 interview with The Press-Enterprise, Simmons said that he spends two hours on his makeup alone every night. He creams his face with what he calls a white clown foundation. Then, he takes a black eyeliner pencil and stipples the design around one eye and connects the dots. Next, he outlines a widow’s peak. "The most difficult part is to mirror what we see on the opposite side," he said. He refines the lines with Q-tips. He uses a brush to fill in black paint around his eyes, widow's peak and mouth. He sets everything with powder patted with a shaving brush. "You can't make a mistake. You're fixing, fixing and redrawing," he said.

Last year, Gene told Australia's Triple M radio station that it takes him two hours to apply his makeup "because none of the lines on my face, and I've got a few, they're no straight lines. It's difficult to not have a straight line matching on the other side because we don't use stencils; it's all hand-drawn. All those bent lines on the makeup have to be, you know, reasonably accurate on the other side."

As soon as the war paint goes on, @genesimmons and @PaulStanleyLive’s alter egos come out. Even though they’re now in their 70s, they’re still something to behold up close. #60Minspic.twitter.com/TXfSF756jc