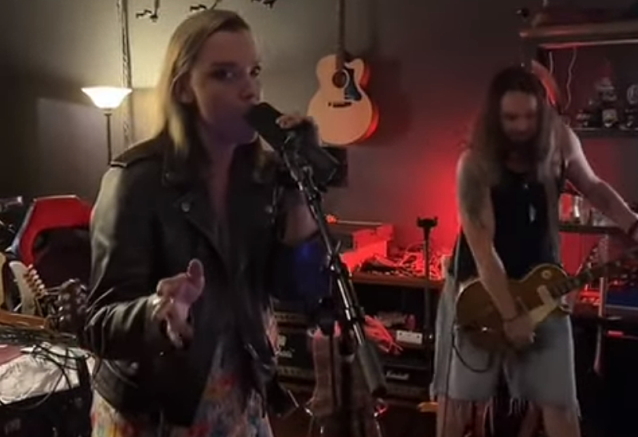 HALESTORM has shared its cover of Adele's "Hello". Check it out below.

The band uploaded its rendition of the track in response to a fan request for the Lzzy Hale-fronted outfit to "put a metal spin" on the song which was originally released in 2015 as the lead single from the English singer-songwriter's third studio album, "25".

In recent years, Lzzy has been performing intimate cover versions of songs by some of her favorite pop divas during HALESTORM's concerts. "I started playing Adele's 'Someone Like You', amongst other things, in the middle of our set," she told Radio.com back in 2018. "We have a small section where we'll roll out my piano and I'll do our song 'Dear Daughter', and then I'll throw in some other things; for a while, it was Whitney Houston's 'I Will Always You'."

She continued: "It's fun to throw those things out there, because I think that no matter what walk of life you come from, or even the fact that it's at a rock show, we can all agree that Adele's awesome, and so is Whitney Houston. And I love looking at, like, the poster child for metal and masculinity staring at me in the front row and just seeing them sing every word."