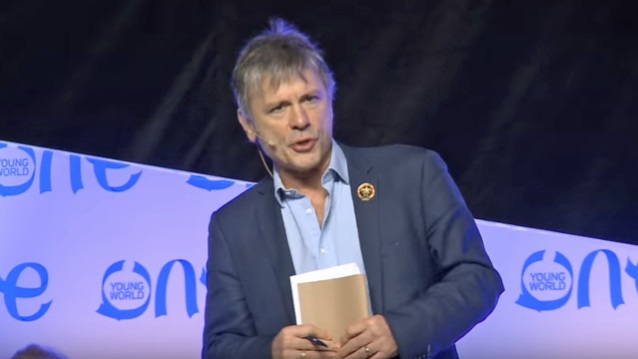 Environmental activist and IRON MAIDEN lead singer Bruce Dickinson gave a powerful keynote speech and introduced delegate speaker Marek Kubik at this year's edition of the "One Young World" summit. The world's premier forum for young leaders was held in early October in Bogotá, Colombia and brought together 1,300 delegates from more than 190 countries, empowering them to make lasting connections to create positive change.

Dickinson last year compared the oil market's worst slump in a generation to what happened to the music business more than a decade and a half ago when it refused to adapt to the changes brought about by the Internet.

"People did not want to be thieves — they were just enthusiastic about bands and could not believe their luck," he said.

The singer explained that the oil and gas companies are facing a similar challenge as low oil and natural gas prices are proving to be a short-term ally for environmentalists and consumers but a job killer for the industry.

"It happened to the music industry ten to fifteen years ago," Dickinson told Energy Voice. "The oil industry is like the record industry. It needs to look at what it's doing. It's an energy supplier.

"When record labels got turned over by digital, it did not mean people stopped wanting music. It just meant people did not want to pay for records anymore.

"They still pay for music, only in different ways. They buy the t-shirt, the concert ticket, the merchandise, but the music itself they get pretty much for free.

"For the oil industry, people still need energy, but they will use it and get it in different ways. If the oil industry only concentrates on digging stuff out of the ground it will go the way of the dinosaurs."