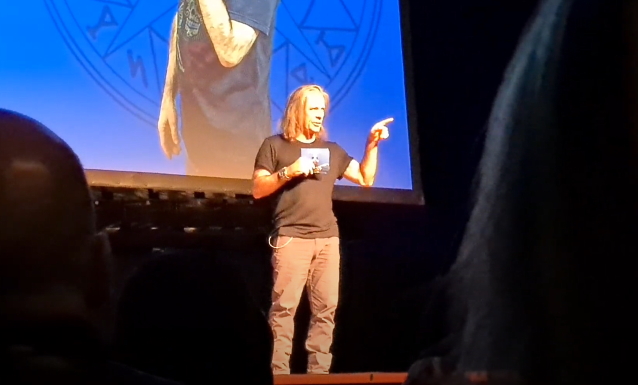 Fan-filmed video footage of Bruce Dickinson belting out an a cappella version of the IRON MAIDEN song "Revelations" during his December 10 spoken-word show at Usher Hall in Edinburgh, United Kingdom can be seen below.

Earlier this month, Bruce spoke to BBC Radio Scotland's "The Afternoon Show" about his gig at Usher Hall. Asked if it takes a different type of courage to stand in a front of an audience without a backing band and a huge production, Dickinson said (as transcribed by BLABBERMOUTH.NET): "It's terrifying. It's absolutely terrifying. I've got a little carpet that I stand on, which appears… I requested a carpet to stand on. And there's a little table and a glass of water and, more often than not, a bottle of beer. And that's it. I've got some slides and I just riff around the whole thing. There's a bit of physical comedy involved as well, which I won't go into, but if you are of a nervous disposition and don't like talking about drummers in anatomical detail, then you should stay away. And I hasten to add, there are some naughty bits and I'm not shy of using the odd naughty word from time to time that I couldn't possibly say on the radio."

As previously reported, Dickinson will embark on a two-month North American spoken-word tour in January.

Dickinson recently told Pablo of the Minneapolis, Minnesota radio station 93X about his current spoken-word tour, which kicked off in his native United Kingdom in August: "It's hopefully reasonably amusing. It's a look at how a spotty kid from the middle of nowhere ended up being the singer in IRON MAIDEN wearing crazy trousers, and all points in between. And it covers the cancer thing. It covers a lot of the early-days stuff, like how I learned to sing, all the weird stuff that happened to me at school and what formed your personality [and] character — all done with a very dark sense of humor, I hope. And then we take a break, and then the last 45 minutes, one hour-ish is basically improv. And so what I do is I take cue cards from the audience they write on the night, and I arrange them into kind of an improv script. Then I do that. That's the show."

With the legend , the one and only Bruce Dickinson in Edinburgh!!!!🤘🤘🤘

Scream for me Edinburgh 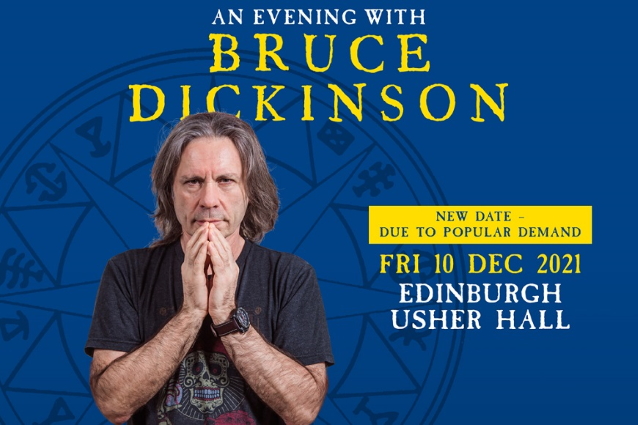