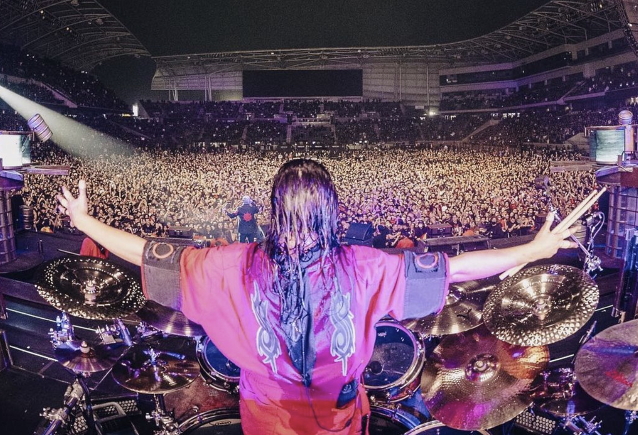 Multi-camera drum-cam video footage of Jay Weinberg performing the new SLIPKNOT single "The Chapeltown Rag" live with his bandmates for the first time on November 5 at Knotfest Los Angeles can be seen below. The event was livestreamed as it happened, giving fans access to both the studio version and SLIPKNOT's live performance of "The Chapeltown Rag" within only hours of its premiere.

The studio version of "The Chapeltown Rag", which was released on November 5, was produced by Joe Barresi, who has previously worked with AVENGED SEVENFOLD, QUEENS OF THE STONE AGE and CHEVELLE, among many others.

M. Shawn Crahan, better known as Clown from SLIPKNOT, added: "'The Chapeltown Rag' facilitates a sort of mindset that you're going to like: it's along the barnburner side of things."

SLIPKNOT's last album, "We Are Not Your Kind", was released in August 2019. The LP sold 118,000 equivalent album units in the U.S. in its first week of release to land at position No. 1 on the Billboard 200 chart. Furthermore, the album made an impact worldwide with No. 1 debuts in the United Kingdom, Mexico, Australia, Canada, Japan, Ireland, Belgium, Portugal and Finland, as well as Top 5 debuts in Germany, France, Norway, Italy, Austria, Sweden, Switzerland, The Netherlands, Poland, Spain and New Zealand.