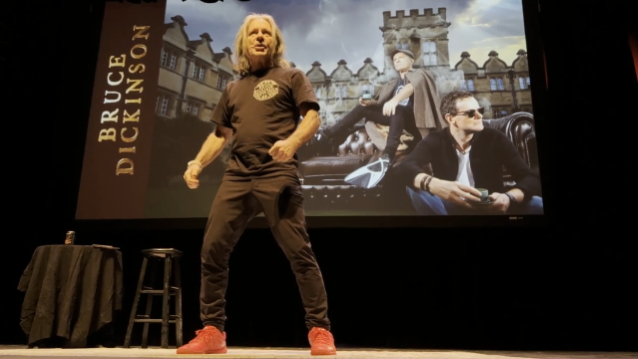 During the question-and-answer portion of his March 12 spoken-word show at the House Of Blues in Las Vegas, Nevada, Bruce was asked by a couple of different audience members if he had wished Steve a happy birthday earlier that day. He then proceeded to lead the crowd through a rendition of "Happy Birthday" in honor of the founding MAIDEN bassist, who formed the band in 1975.

Since its inception nearly five decades ago, MAIDEN led the wave of British heavy metal music and became a global institution. Over the course of 47 years, the band has come to embody a spirit of fearless creative independence, ferocious dedication to fans, and a cheerful indifference to critics. IRON MAIDEN has built a following that reaches every culture, generation, and time zone. With over 90 million album sales, more than 2,000 live performances in 63 countries, tens of millions of fans and 17 studio albums of unerring quality, IRON MAIDEN has more than earned its proudly held status as one of the most influential and revered bands of all time.

One of the world's most storied musicians, Dickinson has been MAIDEN's internationally acclaimed lead singer for more than 40 years, and aside from the decades spent delivering high-octane performances with his larger-than-life persona, Bruce has lived an extraordinary off-stage existence too. A true polymath, Bruce is, or has been, an airline pilot and captain, an aviation entrepreneur, a beer brewer, motivational speaker, film scriptwriter, twice-published novelist, radio presenter, TV actor and a world-class fencer.