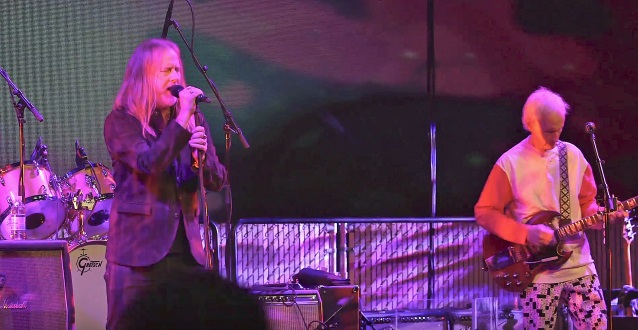 As part of this year's edition of Museum of Pop Culture's Founders Award celebration honoring THE DOORS, ALICE IN CHAINS guitarist Jerry Cantrell joined the iconic rock band's surviving guitarist Robby Krieger for a performance of "Love Her Madly". The December 7 event also saw NIRVANA bassist Krist Novoselic bring out his accordion to perform "Light My Fire" with Robby and drummer John Densmore.

The Founders Award celebration is the signature event for MoPOP, formerly Experience Music Project. It honors the life's work of living legends while raising money for the institution's education programs.

THE DOORS recently released a 50th-anniversary edition of their second album, "Strange Days". Like the 50th-anniversary reissue of the band's debut album that came out earlier this year, the "Strange Days" re-release contains both the original mono and stereo mixes of the set on two CDs, while the original mono mix was made available on vinyl. There are no bonus tracks or unreleased material, but the package includes new liner notes and additional photos.