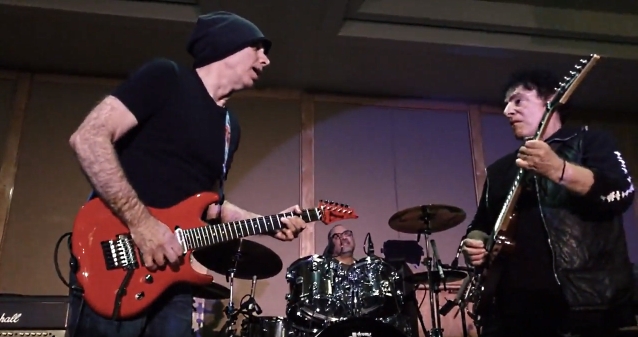 Prior to this year's event, Satriani said: "The students that have come to the first four 'G4 Experiences' have been as unique and eclectic as you could imagine so for 'G4 Experience V5.0', I've put together a team of instructors that really reflects that diverse nature

"The lineup this year is probably our best yet. It's so exciting, getting to be so totally immersed and getting to be so close to these great players. You never know what's going to happen, and at the end of the week, you'll think, I went somewhere beautiful, I had fun, I made some new friends, and I grew as a musician. And there's nothing better than that."

Satriani was joined at "G4 Experience V5.0: Rocks The Desert" by his own touring band, Mike Keneally (guitar and keyboards),Bryan Beller (bass),and Joe Travers (drums),all of whom will also served as instructors and accompaniment for each night's all-star concert.

Satriani's 16th solo album, "What Happens Next", arrived in January 2018 and is available now via Sony/Legacy Recordings.