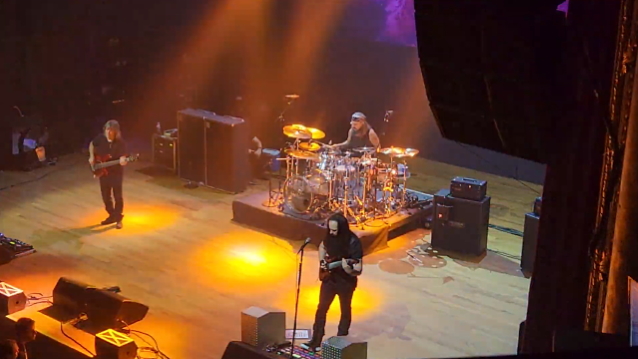 DREAM THEATER guitarist John Petrucci kicked off his first headlining solo tour last night (Wednesday, October 5) at The Strand Ballroom & Theatre in Providence, Rhode Island. Petrucci performed material from his recently released solo album, "Terminal Velocity", as well as songs from his widely acclaimed debut release, "Suspended Animation". "Terminal Velocity" marked the first time that John and former DREAM THEATER drummer Mike Portnoy recorded together since Mike left the band in 2010. Now, John is taking his instrumental trio on the road performing live with Portnoy and legendary bassist Dave LaRue in an onstage reunion that has been 12 years in the making.

Asked in a recent interview with Robert Cavuoto of Sonic Perspectives if this tour will be the first time he and Mike have performed together since Portnoy exited DREAM THEATER, Petrucci said: "It will be, yeah — since Mike left. He left the band about 12 years ago, so our last show was a festival in Japan that we played together. The first show of this tour is in Providence, Rhode Island on October 5th, and when we step on stage, that'll be the first time we've stepped on stage together and performed live since that last show in Japan. So it's a big deal; it's kind of a personal event for the two of us. And I'm so happy that him and Dave could do this tour with me. Obviously, they recorded drums and bass on 'Terminal Velocity', so it's that same trio, that same band. We played a bunch of shows as that same trip back in the early days of 'G3', so the first ones I did in 2001 — it was me, Mike and Dave. So the band is back together. [Laughs]"

The historic tour will run through October and November and promises to be an unforgettable night of live musicianship. The recently reunited all-female band MEANSTREAK is the special guest openers for the tour. MEANSTREAK is comprised of guitarists Marlene Portnoy (Mike's wife) and Rena Sands (Petrucci's wife),vocalist Bettina France, bassist Martens Myung (wife of DREAM THEATER bassist John Myung) and drummer Yael.

In a September 2021 interview with Revolver, Petrucci said about his renewed working relationship with Portnoy: "Chemistry is everything. It's funny, too — with my solo album, I'd gone in, written all the music, recorded all the guitars, programmed drums, played bass. It was all done, and then I had to go in and get Dave LaRue to play bass on it and Mike to play drums on it. And when Mike started playing drums — I remember the first day he came into the studio and he just started playing to this music that I wrote, it just sounded like the two of us. It just was really nostalgic. Even though we didn't write it together, we weren't jamming together, we weren't even in the same room when I was writing it, but there's just something about that chemistry that creates this magical sound. And one of the things I thought was really awesome with the fans out there was when it came out, it just got such a positive reaction. People were just, like, 'I'm just so happy that you did this,' and the music sounds positive and happy. And this was, like, really all during the heart of the whole pandemic. So it was a very good, positive [experience]."

In 2020, Petrucci told "Coffee With Ola!" that "it was really great" for him to have Mike play on the record. "I hadn't done anything musically with him since he left DREAM THEATER over 10 years ago," he said. "And it was really just fun, because it's different when you're in a band with somebody. Really, we grew up together — we met when we were 18. And you're in business together. It's different than when it's, like, fast forward, now it's, like, my friend is playing drums on my album. It was so easy going and so cool. He was able to come to my studio despite the pandemic situation on the East Coast in the U.S. It was safe for him to come to the studio — he doesn't live that far from me. And he spent a week, and we had fun. And he did a killer job.

Portnoy, who co-founded DREAM THEATER more than 35 years ago, abruptly quit the band in September 2010 while on tour with AVENGED SEVENFOLD. He has since been replaced by Mangini (ANNIHILATOR, EXTREME, JAMES LABRIE, STEVE VAI). 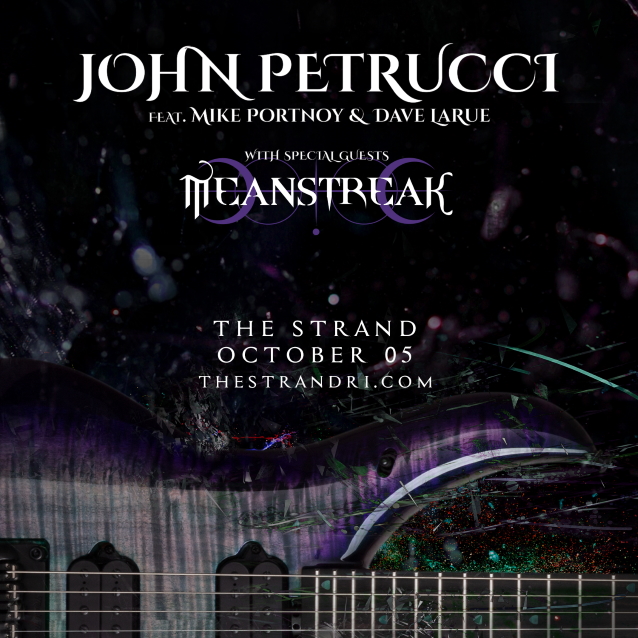