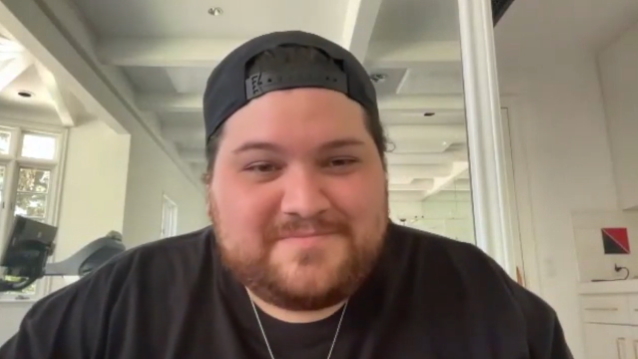 Wolfgang Van Halen says that he is "super happy and proud" of the fact that he performed his late father's songs at the recent Taylor Hawkins tribute concerts. The son of Eddie Van Halen played three VAN HALEN songs — "On Fire", "Hot For Teacher" and "Panama" — over the course of two concerts in September alongside Dave Grohl on bass, Josh Freese on drums and THE DARKNESS's Justin Hawkins on vocals.

Regarding the other musicians tasked with performing the VAN HALEN material at the Taylor Hawkins tribute concerts, Wolfgang said: "Knowing that Josh was gonna be there, I was, like, 'Josh Freese is one of the best drummers on the planet.' Seeing the response of people saying, 'Who was on drums?' It was, like, 'Dude, you've gotta learn yourself something and realize that Josh Freese has literally played on fucking every single thing you've ever heard, ever.

"I was pretty sure Justin could do it, but then once we got there and he hit it, it was, like, 'Fuck, this is gonna be amazing.' It was really exciting. He is a sweetheart of a human; he's such a kind man. It was really special, man. I'm super happy and proud with how everything came to be."

According to Wolfgang, he and the other musicians only rehearsed less than a handful of times before the London concert on September 3. "We rehearsed it a couple times in L.A. with just Josh, Dave and I [in] one day," Wolfgang said. "And then we got there and rehearsed one day with Justin. So all in all we played each song maybe five or six times. It was really special."

Wolfgang also responded to those people who have suggested he has an easier time playing the classic VAN HALEN songs because he is the son of Eddie Van Halen. "I didn't just put a CD in and upload it into my head," he laughed. "I practice a lot. It's a really weird backhanded compliment, where it's, like, 'Oh, you did nothing to be able to do this.' And it's like, 'No, I work very hard to be able to do what I can do.' I understand where it's coming from, though."

This past summer, Wolfgang spoke to Rolling Stone magazine about why he is adamant about not playing VAN HALEN covers when touring with his own band MAMMOTH WVH.