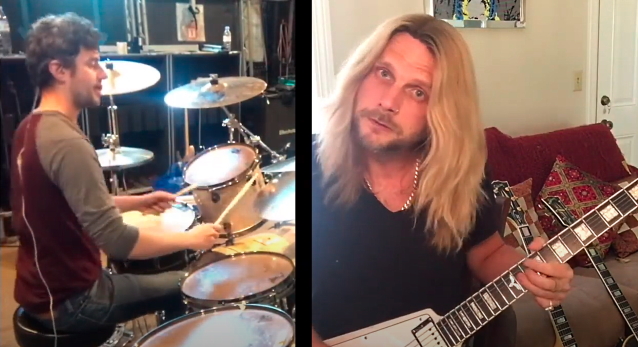 JUDAS PRIEST guitarist Richie Faulkner recently teamed up with session/touring drummer Joe Lazarus to record a quarantine version of the IRON MAIDEN classic "To Tame A Land". You can now check it out below.

Faulkner tweeted out the clip earlier today and included the following message: "Myself and my bro @joelazdrums took it back to the piece of mind album for some quarantine fun and laid down To take a land [sic]. Wicked song, wicked drumming by joe and lots of fun to do. Check out the full vid on the you tubes. Shall we do another one?"

Back in 2015, Faulkner, who was once the guitarist in the backing group for Lauren Harris, daughter of IRON MAIDEN bassist Steve Harris, was asked in an interview with GigsAndFestivals.com if he was "on the subs bench for IRON MAIDEN" prior to joining JUDAS PRIEST as the replacement for K.K. Downing. He responded: "Yeah, you never know! I worked with Steve and Lauren, and [Steve] was one of the first ones that I told when I got the PRIEST gig. I said I've been approached by another band, and he was over the moon when I told him it was PRIEST. He's one of these guys who's really supportive, and he said: 'I would have had you in my band. If anything would have happened to any of my guys, you were the guy that was going to do it.'"

Faulkner continued: "[Steve is] a great guy, and like the guys in PRIEST, he's an idol and he's a teacher. He wished me all the best and sent me on my way. We saw him at Download [festival] a couple of months ago. He loves the music; he loves the vibe, and he's a genuine fan of all things heavy. So, it was great to get his endorsement right from the beginning."

Earlier this year, Faulkner said that he had "a ton of ideas" for JUDAS PRIEST's follow-up to "Firepower" album. Released in March 2018, "Firepower" was the second PRIEST LP to feature the 40-year-old guitarist.

JUDAS PRIEST is scheduled to celebrate its 50th anniversary this year with a world tour coming to the U.S. in the fall.

Myself and my bro @joelazdrums took it back to the piece of mind album for some quarantine fun and laid down To take a land. Wicked song, wicked drumming by joe and lots of fun to do. Check out the full vid on the you tubes. Shall we do another one?https://t.co/LWInX5MsACpic.twitter.com/LSvVuvMd5n

So, after he completely nailed the solo on Alexander The Great the other day, me and @RichieFaulkner decided to do this one properly. And he’s done exactly the same to this one. Here’s To Tame A Land - @IronMaiden
Full song here 👉🏼 https://t.co/Lx77EhcQElpic.twitter.com/JS1BP5tj4F