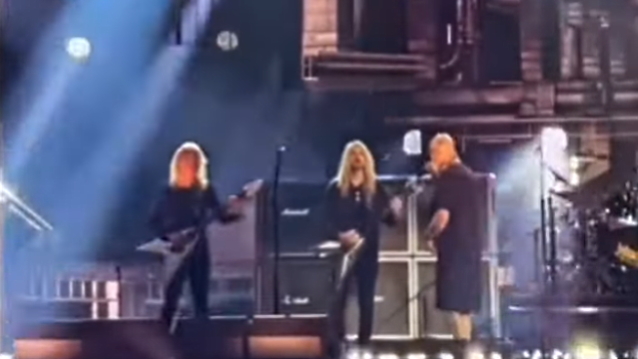 A short video of guitarist K.K. Downing and drummer Les Binks rehearsing with JUDAS PRIEST for this weekend's Rock And Roll Hall Of Fame induction ceremony can be seen below. The soundless clip was originally uploaded to the Rock Hall Instagram Live and was later shared by a fan on YouTube, with a studio recording of the PRIEST classic "Metal Gods" dubbed over it.

According to the Hall Of Fame, the JUDAS PRIEST members that will get inducted include current members Rob Halford (vocals),Ian Hill (bass),Glenn Tipton (guitar) and Scott Travis (drums),along with former members Downing, Binks and late drummer Dave Holland.

The 2022 Rock Hall induction ceremony will be held at the Microsoft Theater in Los Angeles. It will air at a later date on HBO and stream on HBO Max. There will also be a radio simulcast on SiriusXM's Rock & Roll Hall Of Fame Radio channel 310.

Ian recently confirmed to the Rock 100.5 The KATT radio station that PRIEST will perform with three guitarists and two drummers for the first time at the Rock Hall, with Halford, Hill, Tipton and Travis set to be joined by Binks, Downing and current guitarist Richie Faulkner at the event. "It's gonna be special, I think," Hill said. "Either that or it will all implode. [Laughs]"

Asked if he has any hesitation about playing with K.K. again, Ian said: "Not really. He deserves to be up there with us. He really does. Like I say, he played an immense part in the band while he was there. So, yeah, I've got no problem with him being up there at all."

Last month, Hill was asked by the Detroit Metro Times if he thinks there is any chance of ever reconciling with Downing and him rejoining PRIEST. Hill responded: "I think time is not on our side for that, you know? Never say never, put it like that. [Downing's] gonna be there at the Rock And Roll Hall Of Fame anyway. He's gonna get up and play some songs with us there. It might kickstart something; I don't know. On the other hand, he might pull us all apart. [Laughs]"

Earlier last month, Downing confirmed to Ultimate Classic Rock that he will perform with JUDAS PRIEST at the Rock Hall ceremony. "I think we've probably got eight or nine minutes," he said. "I'm not even going to be able to break a sweat. The main thing is to represent the attitude and hopefully the legend of what JUDAS PRIEST is and has become and what it means to everybody who's been on that very long journey through the decades with the band. And hopefully it will just kind of remind people and bring back some cherished memories of the heavy metal parking lots all around the world."

Downing said that Les Binks, PRIEST's drummer from 1977 to 1979, will also perform with the band at the event and added that it will be like riding the proverbial bicycle, more than a decade after the guitarist last played with PRIEST. "It's what I've done so many times," Downing said. "It's almost like cracking a beer, let alone riding a bike. It's embedded in me. It's what I do. So it'll be quite something to look forward to, just to get up there and crank the amps up and just do it once again, for that short moment in time."

A month ago, Halford told Ultimate Classic Rock that the PRIEST camp has been in touch with Downing and Binks about the upcoming induction, and "everybody's been very cool and agreeing. There's just been [an attitude of], 'Let's just relish this opportunity and jam and put everything on 11,'" he said.

Although Halford couldn't confirm yet whether Downing or Binks would join PRIEST onstage during its Rock Hall performance, the singer said both former members would be involved in some capacity.

Travis told the "Rocker Morning Show"'s Mark Frankhouse of the 107.7 RKR radio station that PRIEST will play "a medley" of "PRIEST classics" at the Rock Hall induction ceremony.

This past May, just days after it was announced that PRIEST would be inducted into the Rock Hall this year, Downing was asked which song or songs he would like to perform with PRIEST at the induction ceremony. He responded: "Oh, wow. I don't really know what the setup would or could be — whether Glenn" — who's battling Parkinson's disease but was on the road playing during the encores of PRIEST's latest North American tour, performing "Metal Gods", "Breaking The Law" and "Living After Midnight" — "would be there and we all would… I know Glenn is just playing some of the more shorter kind of songs. And if that's the situation, then I'm sure the songs would be whatever Glenn would be able to feel comfortable with. And that's okay, and that's fine. But I don't think it's about, really, what the repertoire would be; I think it's just about would this and could this happen in the way that people want to and expect it to happen. We'll have to see. And it depends what people want to happen, myself included. I'm gonna have a good think."

In February, Hill and Halford told Billboard that they would be happy to stand alongside Downing at the Rock And Roll Hall Of Fame induction. "It's not a problem to us, no," Hill said. "Ken was an integral part of this band for a very, very long time. He deserves to be there along with the rest of us." Halford predicted that, "It won't be as awkward as Ace [Frehley] and Peter [Criss with KISS's Rock Hall induction]. I don't think it'll be awkward at all. I think you have to let all of that go because it's the night that matters. It's the moment that matters — but, again, the proverbial saying, we'll cross that bridge when we get to it."

Downing previously told Rockin' Metal Revival that there was a very good chance that he would perform with his former bandmates again if PRIEST got the nod. "Oh, I think absolutely," he said. "I mean, why wouldn't you, really? It's a special thing. We're all of an age now. These opportunities only come once in a lifetime. And it seemingly takes a lifetime to get into the Rock And Roll Hall Of Fame. I've always said, there's no such thing as a young legend, right? [Laughs] So, while we're still here, it would be great to receive that accolade and put on a great performance and put that one to bed."