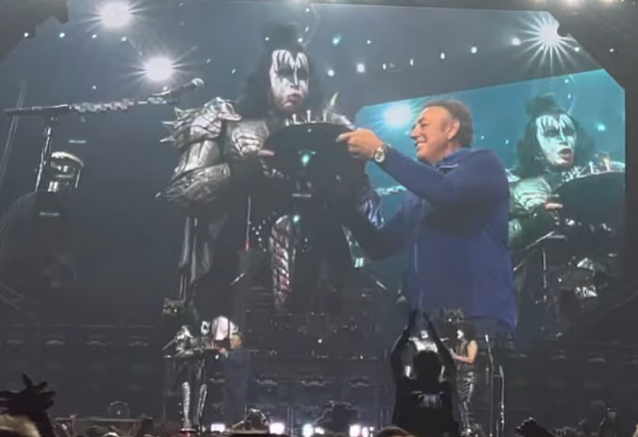 After KISS frontman Paul Stanley led the audience in a "Happy Birthday" singalong for his bandmate, Simmons — who was actually born on August 25, 1949 — was approached by KISS manager Doc McGhee, who brought out a cake with candles for Gene to blow out, as the crowd cheered him on.

Earlier today, Gene shared a video of the moment on Twitter and he wrote in an accompanying message: "Thank you, Sydney for honoring me on my birthday. It means the world to me."

Earlier this month, Gene again said that he doesn't know exactly when and where the final concert of "End Of The Road" will take place. Simmons discussed KISS's last-ever performance during an appearance on Dean Delray's "Let There Be Talk" podcast. He said: "We don't know if it's [going to be in] New York. I have good reasons why it should be, but the important thing is when it's the last show, it'll be the last show. KISS the touring band will stop. But the touring band. KISS will continue in other ways. I have no problems with four deserving 20-year-olds sticking the makeup back on and hiding their identity.

"KISS will continue in ways that even I haven't thought of," Gene predicted. "But I can conceive of… You know, the 'Blue Man Group' and 'Phantom Of The Opera' tours around the world with different personnel. There could and should be a KISS show, kind of live on stage with effects and everything else, but also semiautobiographical thing about four knuckleheads off the streets of New York that ends with the last third as a full-blown celebration, a full-on performance. Not with us. Although not a problem stepping in every once in a while."

Thank you, Sydney for honoring me on my birthday. It means the world to me. 🤟😎 https://t.co/6LMAOi1z64