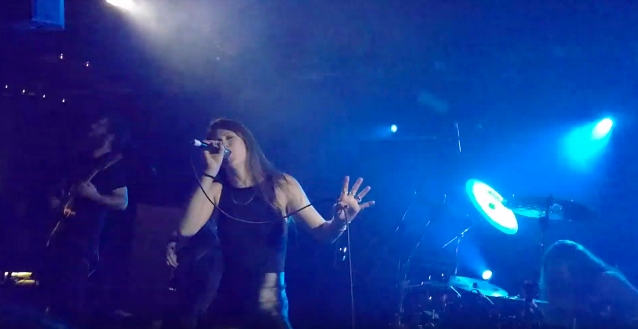 Quebec metal band KARKAOS played the second show with its new lead singer, KITTIE frontwoman Morgan Lander, on September 21 in Montreal. Fan-filmed video footage of the concert can be seen below.

When her addition to KARKAOS was first announced in August, Lander said in a statement: "Joining KARKAOS has been a true honor for me. It feels so incredibly good to be back in the metal game after a number of years away, and I cannot wait to step on the stage once again with these amazing musicians."

Added band founder Vincent Harnois: "We already knew how talented Morgan was when we began talking to her about joining the band. When she sent us her first demos, we realized that this was going to be something extremely special. She is an absolute pleasure to work with and she brings a whole new dimension to our songs. It is an honor to have her with us and we are thrilled to start the next chapter or our band together."

KARKAOS is ready to push the boundaries of extreme melodic metal with its upcoming follow-up to "Children Of The Void". The band entered Silverwings studio last month to demo and work on pre-production on eight new songs.