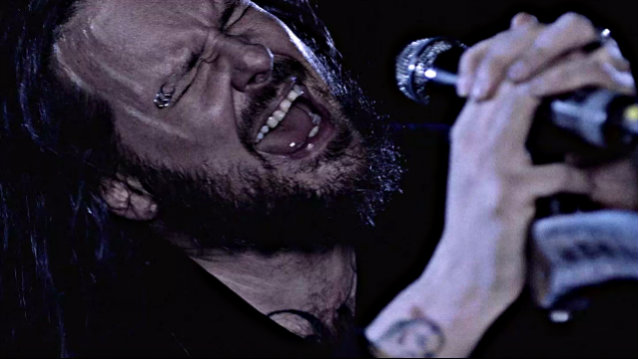 Watch KORN's Creepy Video For 'Black Is The Soul'

KORN's music video for the song "Black Is The Soul" can be seen below. The track is taken from the band's latest album, "The Serenity Of Suffering", which came out at the end of October.

Said KORN singer Jonathan Davis: "'Black Is The Soul' is a song about being pulled away from the right path and the video reflects that experience of trying to navigate those conflicting emotions." Guitarist James "Munky Shaffer added: "I feel that this songwriting and production paired with the aesthetic look of the video shows a maturity and growth from the band that is continually evolving."

"Black Is The Soul" was reportedly written on the birthday of KORN guitarist Brian "Head" Welch's mother. Welch said in a track-by-track video interview: "The working title for that song was 'Mary Ellen Thrash', 'cause her name is Mary Allen and then it turned into 'Black Is The Soul', which is kind of creepy after it being named after my mom."

Welch continued: "Jonathan wrote that as one of the first songs, and he really did a good job on that one. And the lyrics… I love that line, actually: 'Black is the soul that's led astray.' 'Cause we've all been there — we've all been led astray in some in life that is unhealthy."

KORN and STONE SOUR will join forces for a summer tour, set to get underway June 16 at the USANA Amphitheatre in Salt Lake City, Utah and then continue through early August.