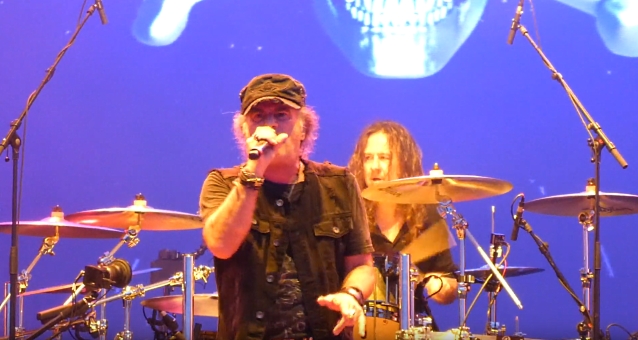 Fan-filmed video footage of KROKUS's June 21 performance at the Rock The Ring festival in Hinwil, Switzerland can be seen below.

As previously reported, KROKUS will extend its last-ever tour to include dates in USA, Canada and Mexico.

Back in September 2018, the Swiss hard rock legends announced that they were going to be embarking on a farewell tour dubbed "Adios Amigos" before calling it a day. At the time, they said their final show would take place on December 7, 2019 at the Hallenstadion in Zurich, Switzerland.

Earlier this month, KROKUS frontman Marc Storace posted a message on Facebook indicating that the band would play additional concerts beyond the Zurich date.

"We always said Zürich is the last show for Europe — but USA, Canada and Mexico want some 'Adios' too!" he wrote. "That's why we do an encore in 2020 there — we think our fans deserve that — they cannot all fly to Europe."

Storace later clarified that he and his bandmates are "not responsible for choosing the countries/cities/towns we play in, since we depend on your local promoters to book us. But you can help by calling your local radio/TV stations asking for more KROKUS," he wrote. "Hell yeah! We'd love to wake up your lazy town!"