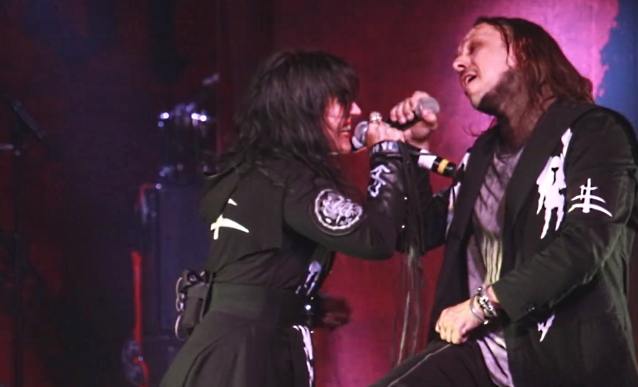 Capital Chaos TV has uploaded video footage of LACUNA COIL's entire October 3 performance in Sacramento, California. Check it out below.

The deluxe edition of "Black Anima" comes with a limited-edition custom deck, created with the help of artist Micah Ulrich.

The band recently completed the "Disease Of The Anima" North American tour with ALL THAT REMAINS.

LACUNA COIL frontwoman Cristina Scabbia told LA Metal Media about the "Black Anima" title: "It has been a while that we wanted to include the word 'black' in the title. The idea was there for quite a long time, but we wanted something to represent the record that could work well with the word 'black.' We immediately thought about 'anima' because it means 'soul' in Italian. We combined even in the past some Italian words with English words. We are Italians and we just like to include something more of our roots. This record, if 'Delirium' was coming from a deep, sadness kind of moment, this record is the realization that sometimes it is okay to not be okay. Life is not perfect. We're all going through struggles. We don't have to be afraid to talk about them and we don't have to be afraid to show the lowest parts of our life. Because we are not alone. Other people are dealing with this stuff at the same time as we are dealing with it. Everything will eventually be okay because of yin and yang."

Regarding the disc's musical direction, Cristina said: "The songs are really diverse. I would say, though, the best would be to listen to from beginning to end. I know that we are in an era where [people] stream music where you listen to a song and skip to another. For us, the best that would be for our fans is whoever has the chance to listen to 'Black Anima' would take one hour out of their day and just listen from the beginning to the end. We did an opening track and a closing track. And even though the songs are not connected, it really is a journey. We really put a lot of thought into the progression of the songs as well. We're still attached to the old-school idea of a record and not just single songs. We don't like to focus on one song to put out as a successful single and forget about the other songs because they are fillers. We don't think this way. For us, each song has a special meaning and we took care of that song with the same importance as all the other songs."