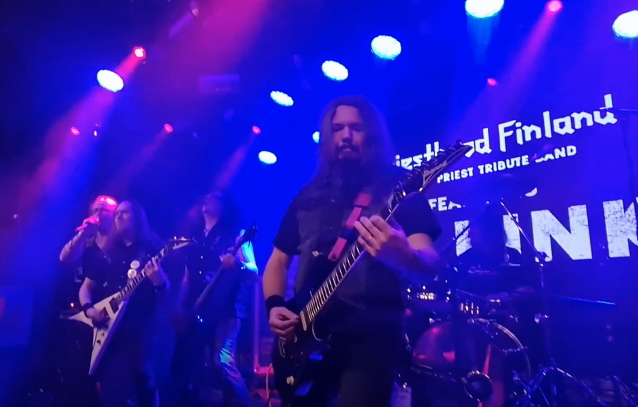 Fan-filmed video of former JUDAS PRIEST drummer Les Binks performing with the Finnish PRIEST tribute band PRIESTHOOD FINLAND on November 19 at the Classic Rock And Metal Meeting at On The Rocks in Helsinki can be seen below.

Binks was among the PRIEST members who were inducted into the Rock And Roll Hall Of Fame on November 5 at the Miscrosoft Theater in Los Angeles, California.

After the release of "Unleashed In The East", Binks exited PRIEST and was replaced by ex-TRAPEZE member Dave Holland. Les later told Downing's official web site that the making of the live album "caused a rift between me and [PRIEST's] manager and ultimately led to my decision to leave the band. I just didn't see the point in continuing to work with a band whose manager didn't want me to receive any payment for that live album. A completely ludicrous scenario. It's a classic heavy metal live album which I believe eventually went platinum and he didn't want me to receive a penny for it. Crazy fucker!!! But that's what happens if a band allows someone like that to manage them — they lose members. So exit drummer number four."

Three years ago, Binks told Metal Rules that he understood how Downing's disparaging comments about his former bandmates in the press made it more difficult for K.K. to rejoin PRIEST in time for the group's 50th-anniversary tour.

"When I met up with K.K. [after not being in contact for many years], it sorts of altered my impression of him because I thought he was actually quite more accommodating and easy-going and it was a pleasure to be in his company," Binks said. "And I understand exactly his attitude about the relationship with Glenn, and Glenn is the dominant character in that setup. And how frustrating that must have been for K.K. because he had to put up with that for many years. But I also know one thing: I got on fine with Glenn. I like Glenn. I like them all, and I always thought they were all nice guys. So, I feel that the band as a unit on what they achieved, and throughout the entirety of their career right up until now. The last album, the 'Firepower' album, did really well. So, I think as a unit, and as an entity, it's bigger than any one of them. Do you know what I mean? Even Rob's career, when he went solo, it didn't exactly hit the heights of success that he would have liked."