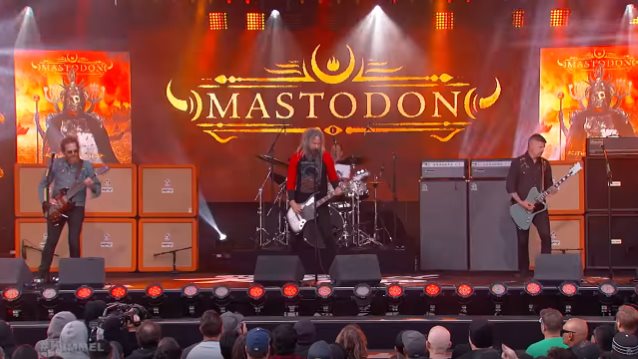 Atlanta heavy rock icons MASTODON were the musical guests on last night's (Monday, April 3) episode of "Jimmy Kimmel Live!" The band played the song "Show Yourself" on the show's outdoor stage in front of a standing-room-only crowd. Check out video footage below.

MASTODON will play a rare, intimate show at Amoeba Music in Hollywood later today (Tuesday, April 4) at 5 p.m. Fans who purchase the band's new album, "Emperor Of Sand", at Amoeba Music in Hollywood will receive admission to the in-store and a limited-edition "Mastodon Live At Amoeba" lithograph commemorating the show. Admission is limited to in-store orders only and two LP/CD + ticket per person. Admittance lines for the in-store will form on Ivar Avenue beginning at 2 p.m. on April 4 and is limited to first purchasers and the store's capacity.

The follow-up to 2014's "Once More 'Round The Sun", "Emperor Of Sand" was recorded at The Quarry Recording Studio in Kennesaw, just outside MASTODON's hometown of Atlanta, with producer Brendan O'Brien (PEARL JAM, NEIL YOUNG, AC/DC, RAGE AGAINST THE MACHINE),who first worked with MASTODON on their seminal 2009 album "Crack The Skye".

MASTODON kicks off a spring U.S. headline tour in support of "Emperor Of Sand" on April 14 in Missoula, Montana, with support from EAGLES OF DEATH METAL and RUSSIAN CIRCLES. The tour also includes stops at several festivals, including the Carolina Rebellion on May 5.