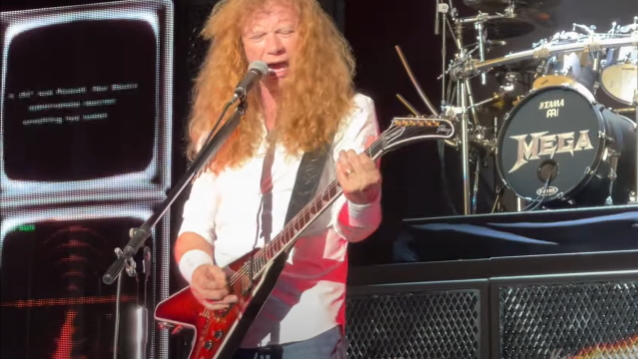 MEGADETH performed its new song "We'll Be Back" live for the first time last night (Wednesday, August 24) at FivePoint Amphitheatre in Irvine, California. Fan-filmed video can be seen below.

MEGADETH kicked off its summer/fall 2022 U.S. tour as the support act for FIVE FINGER DEATH PUNCH on August 19 at RV Inn Style Resorts Amphitheater in Ridgefield, Washington. The trek, which features additional support from THE HU and FIRE FROM THE GODS, will conclude on October 15 in Salt Lake City, Utah.

MEGADETH's setlist for the Irvine concert was as follows:

Just a day or two prior to the Irvine show, MEGADETH mainman Dave Mustaine spoke to Milwaukee's 102.9 The Hog radio station about why he and his bandmates had yet to perform any of the songs from their upcoming album, "The Sick, The Dying… And The Dead!", live, despite the fact that they have already released three of them as singles. He said (as transcribed by BLABBERMOUTH.NET): "We are adding two songs to our set; we are adding 'Night Stalkers' and 'We'll Be Back'. Hopefully we'll be able to add 'Soldier On!' by then too. But a lot of that is dictated by the radio support and the listeners' tastes. When certain songs our fans like to hear, we'll add them into the setlist if we can. If there's a song that we're playing in the setlist and people aren't responding to it, well, obviously we're gonna do the opposite and take it out of the setlist. This is all part of the showbiz part. A lot of people don't care about that; they just wanna rock."

"The Sick, The Dying… And The Dead!" will arrive on September 2 via UMe. Featuring twelve new tracks, the follow-up to 2016's "Dystopia" will be made available on CD, vinyl, and cassette, as well as digitally through all online partners. There will also be a limited deluxe edition 2LP, 12-track album pressed on 180g black vinyl housed in a numbered gatefold jacket with a 12x24 lyrics/credits insert, a lenticular vinyl lithograph and a bonus seven-inch featuring "We'll Be Back" and the unreleased B-side "The Conjuring (Live)". The limited deluxe edition can only be purchased via MEGADETH's official online store, through Sound Of Vinyl and uDiscover.