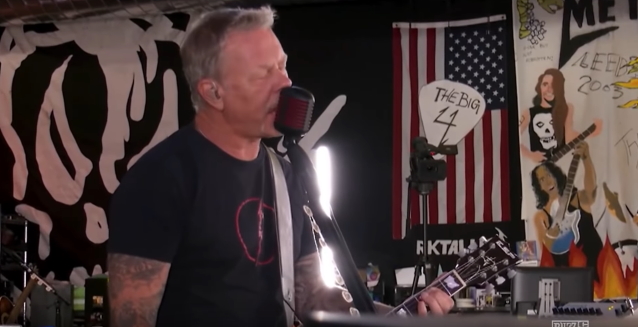 METALLICA performed its classic song "For Whom The Bell Tolls" live from its Northern California headquarters as part of this year's BlizzCon, the first virtual version of Blizzard's games convention.

Like many events in 2020, BlizzCon was canceled due to the COVID-19 pandemic. This year, Blizzard took its fan event and game showcase digital with BlizzConline.

"We would love to be there this year, but obviously can't be, so here we are, and this is for you," frontman James Hetfield told the virtual audience prior to his band's rendition of the "Ride The Lightning" track.

Since there is no in-person convention this year, Blizzard is making the entire event free to watch. The livestream is available on GameSpot's channel on YouTube, as well as on Twitter and Twitch, among other mediums.

Twitch, which has fallen under scrutiny in recent months by record labels represented by the RIAA (Recording Industry Association Of America),replaced METALLICA at the end of BlizzConline's opening ceremony with generic royalty-free music to avoid a DMCA takedown. The band's appearance was ominously preceded by an onscreen message noting that "The upcoming musical performance is subject to copyright protection by the applicable copyright holder."

METALLICA previously performed at the 2014 edition of BlizzCon.