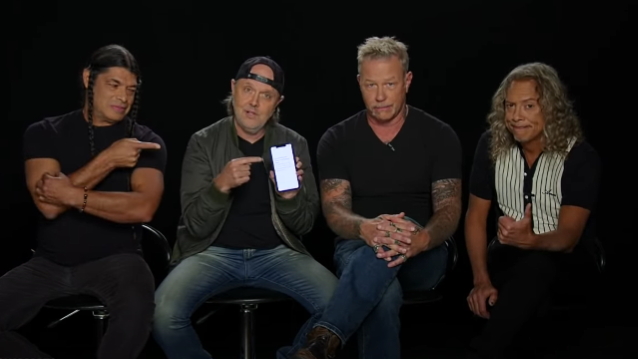 METALLICA appeared on "Jimmy Kimmel Live!" last night (Friday, September 10) to promote the 30th-anniversary box set edition of the band's self-titled LP, better known as "The Black Album." The band performed two songs, sat down for an interview and took part in a "Celebrities Read Mean Tweets"-style segment where the four members of the group read one-star Amazon reviews of the classic 1991 album.

"This is by far one of the most loathsome crimes ever committed against music," drummer Lars Ulrich read.

Guitarist Kirk Hammett continued: "Face it people, this album $ucks. Anybody who thinks this horrible, atrocious, self titled ‘$uck-o-rama’ CD is worth four or five stars must be braindead from smoking crack."

Frontman James Hetfield added: "This album sucks, sad but true! I bought this when it came out and I was horrified when I listened to it, I threw it off a bridge and watched a truck smash it."

During the interview portion, METALLICA talked about how "Metallica" got its "Black Album" moniker, and touched upon Elton John's praise of "Nothing Else Matters" the previous day on "The Howard Stern Show".

METALLICA finished its appearance on "Kimmel" by performing two "Black Album" songs outside Los Angeles's Griffith Observatory, "Wherever I May Roam" and "Holier Than Thou".

The Black Album is one of the most commercially successful and critically acclaimed records of all time. Its 1991 release not only gave METALLICA its first No. 1 album in no fewer than 10 countries, including a four-week run at No. 1 in the U.S., its unrelenting series of singles — "Enter Sandman", "The Unforgiven", "Nothing Else Matters", "Wherever I May Roam" and "Sad But True" — fueled the band's rise to stadium headlining, radio and MTV dominating household name status. The album's impact and relevance continue to grow — as proven by one indisputable fact: The Black Album remains unchallenged as the best-selling album in the history of Nielsen SoundScan, outselling every release in every genre over the past 30 years.