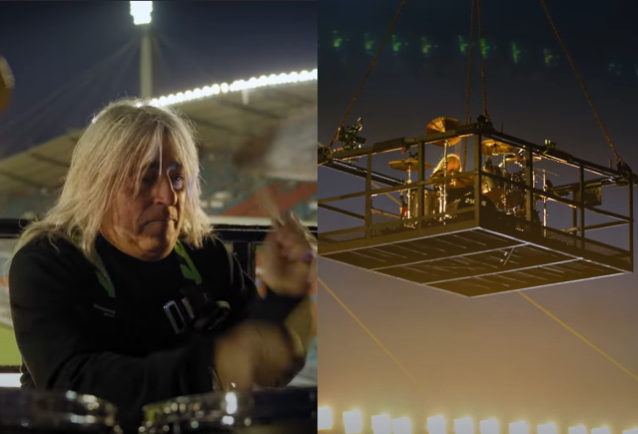 Former MOTÖRHEAD and current SCORPIONS drummer Mikkey Dee is featured in a series of commercials for the car manufacturer Volvo.

The three spots, which promote the Swedish company's new line of electric trucks, were filmed in Mikkey's hometown of Gothenburg.

In one video, which was shot at the city's Ullevi Stadium, Dee can be seen performing what Volvo called "possibly the highest-ever drum solo in the history of heavy metal."

"The Volvo electric trucks are just as flexible as their diesel equivalents and can be built for virtually any task," reads the clip's official description. "And the absence of noise and emissions makes them perfect for nighttime assignments – like the possibly highest-ever drum solo in the history of heavy metal."

Last year, Mikkey spoke about the main differences between playing with MOTÖRHEAD and touring with SCORPIONS in terms of how he paces himself for each individual band's setlist. He told the "Drum For The Song" podcast: "A lot of people say, 'Hey, listen, Mikkey, you're probably sleeping through the [SCORPIONS] set.' And I'm telling you, this is so much more demanding than MOTÖRHEADever was, physically. Because, as you know, if I was starting to lose my breath here and there with MOTÖRHEAD, I could just shout at [Phil Campbell, MOTÖRHEAD guitarist] or Lemmy [MOTÖRHEAD frontman] and go, 'Hang on, boys. Have a drink,' and pretend to tune up the snare a little bit. And Lemmy and Phil, they were not very hard to [convince] to get a break. They went around their stacks and took a drink, and we said, 'Cheers,' and you could even actually have a chat on stage for a while. But with the SCORPIONS, it's all on a click track, because of our screens — the production. And I do play around the click, but it has to work with the lyrics and stuff on the screens and what's going on with the production, which we never had with MOTÖRHEAD.

He continued: "So every show [with the SCORPIONS] is exactly the same length — on the fucking second or minute… Klaus [Meine, SCORPIONS singer] cues whatever he says. So it could be one or two minutes difference between the sets, on two-and-a-half-hour sets. So it's very demanding. It goes up and down, the set, and there's a part in the set after we've done the acoustic medley, and then we come up and do 'Wind Of Change' — I'm actually freezing on stage. And then it's about 40 minutes, 45 minutes of non-stop… We do heavy, heavy songs, and a drum solo, straight into 'Blackout', straight into 'Big City Nights'. I mean, there's 45 minutes where I don't even have a chance to change drum sticks. So that is very, very demanding for me. But it's great — it's a challenge, and I love it. But the more tired I get on stage, the better I play."

Mikkey added: "We usually did 90 minutes, with MOTÖRHEAD, and when we played with other bands, it could be 60 or 70 minutes. But MOTÖRHEAD, we controlled the set ourselves, and here and there, Phil ran outside and changed his guitar or took a piss, or Lemmy disappeared off stage and no one knew what he was doing. We could run it ourselves more in a different way."