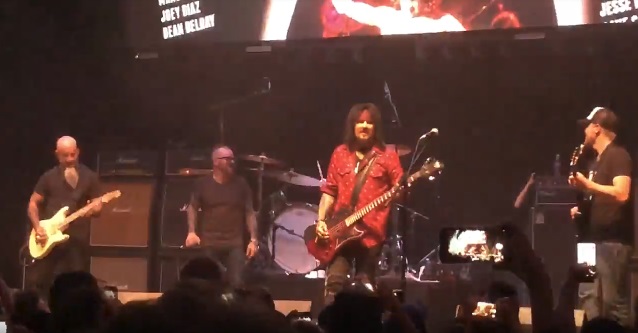 The event, which was organized by rock and roll comedian Dean Delray, started off with Delray, Bill Burr, Marc Maron and Joey Diaz doing stand-up comedy before an all-star band performed AC/DC's classic 1978 album "Powerage" in its entirety.

Prior to the event, Ian said: "I'm going to do my best to honor [late AC/DC guitarist] Malcolm's [Young] mastery. And I'm going to bang my fucking head playing songs from my favorite AC/DC record."

Video footage of "AC/DC Comedy & Rock Show: A Tribute To Bon Scott" can be seen below.

Singer Bon Scott died of acute alcohol poisoning on the night of February 19, 1980, after a night of heavy drinking at a club in London, just days after attending a session with AC/DC guitarists Malcolm and Angus Young where they began working on music for what became the "Back In Black" album.

Malcolm, who co-founded AC/DC with brother Angus in 1973, died on November 18 at the age of 64 after suffering from dementia and failing health for several years. His condition forced him to leave the band in 2014, with his nephew Stevie Young stepping into Malcolm's position.

Asked how Malcolm Young influenced his playing and how he was affected by Malcolm's passing, Scott told Full Metal Jackie's nationally syndicated radio show: "I don't want it to sound weird, but it wasn't a shock [to hear that he had died]. I mean, people knew — I knew that he had been sick for a long time with a disease that, generally, you don't come back from. So it was one of these just-a-matter-of-time kind of things, which is just a huge bummer.

"I had actually talked to a friend of mine at the Loudwire [Music] Awards, who's very close with the AC/DC camp, just to ask if he had heard anything. Because there was no information out there — there was never any information on how Malcolm was doing. And he said he had spoken to someone and from what he had heard, [Malcolm] didn't have long, and that was, like, three weeks before he passed. So I wasn't surprised, but at the same time, that doesn't temper how sad it was and what a huge bummer it is that that guy is no longer with us doing what he pretty much was put on this planet to do."

Ian continued: "I'm the type of person that celebrates people when they go. I don't sit around and do the whole mourning thing and all that. I prefer to celebrate it, so we cranked AC/DC — we put 'Let There Be Rock' on and just cranked it. And that's what I've always done; it's never going to change. So we'll have all of those records for… I'll have 'em for the rest of my life, obviously. Anytime I think about Malcolm, I can go put something on.

"As far as my playing goes, [Malcolm] was my guitar teacher. Obviously, I wasn't sitting there taking lessons from him, but playing along to AC/DC records as a kid is really where I learned how to play guitar. And I would just go song by song by song and learn the chords and not take the time to sit there and learn the lead breaks, 'cause learning the leads would take me days whereas I could learn the whole album in a few hours if I was just learning the chords. And Malcolm was the guy playing the chords. I think my whole way of playing, my percussive right hand, it's very, very similar, in a lot of ways, to what he does. Obviously, I play a different style of music, and the metal that ANTHRAX is playing is a completely different style of music than AC/DC. So, yeah, even though my right hand is very percussive like his, it's in a different way, with palm muting and, obviously, playing the guitar to make a sound that works in the context of ANTHRAX. But, for me, it all comes from what he was doing."

No one touches the great #joshzee hand down one of the best guitars players I’ve ever seen. I’ve known this guy for 30 years and he still blows my mind every time he straps on a Guitar. He absolutely killed last night The guy is just next level. #angusyoung #acdc #bayarea #leadguitar #gibsonsg #bonscott #acdc #letthereberock #marshallamps 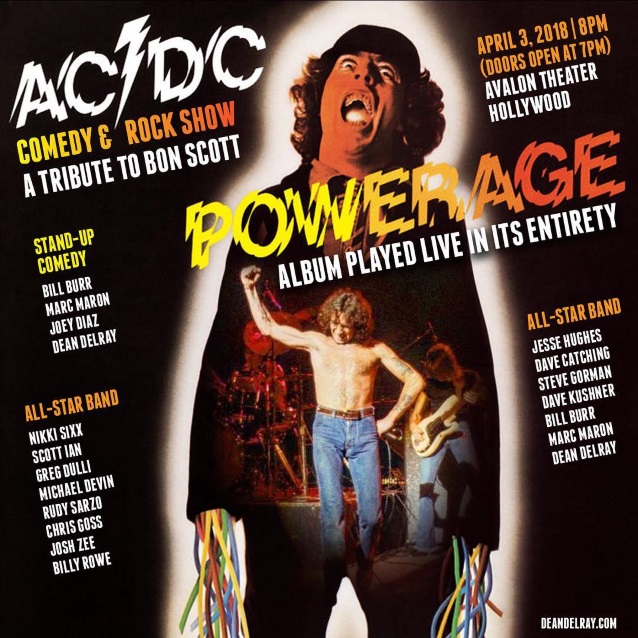