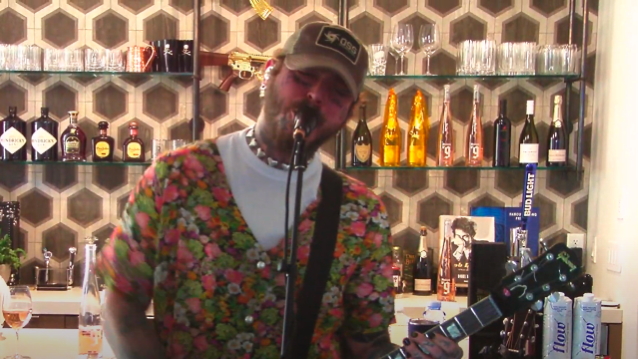 Malone admitted during the 75-minute concert that this was probably his first performance without Auto-Tune. "Everyone knows I can't sing for shit, but I'm trying to sing my heart out for ya'll tonight," he said.

The 15-song set included a near-complete performance of NIRVANA's classic "Nevermind" album ("Polly" and "Smells Like Teen Spirit" were the only excluded tracks),three cuts off "In Utero" ("Frances Farmer Will Have Her Revenge On Seattle", "Very Ape" and "Heart-Shaped Box") as well as a pair of "Bleach" songs ("About A Girl" and "School").

On Wednesday, Courtney Love gave her stamp of approval to Malone for hosting the event. The HOLE frontwoman, widow of NIRVANA frontman Kurt Cobain, also thanked her late husband "mighty kc for writing these songs with your elegant and monkeyed hands that the kids still want to sing and play and hear and use to fight and hunt and cure and heal and eradicate this fucking covid19 virus."

Throughout the show, Google matched all donations at up to $5 million, with all proceeds going to the UN Foundation.

Post Malone previously covered "All Apologies" live. He also has a couple of NIRVANA tattoos, including a portrait of Kurt Cobain on his knuckles and the songtitle "Stay Away" on his forehead.

So proud of @PostMalone and crew. pic.twitter.com/50kzSukVTW

I don't think these fellows can play any better. They are on fire!!!!