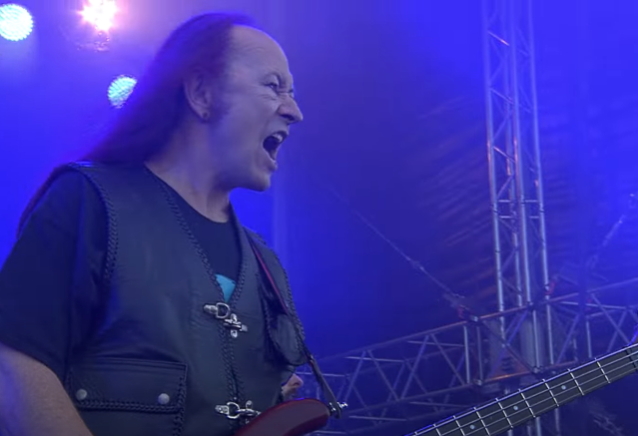 Professionally filmed video of VENOM performing its classic song "Black Metal" on August 5 at this year's Wacken Open Air festival in Wacken, Germany can be seen below.

VENOM frontman Conrad "Cronos" Lant recently confirmed that the band is putting the finishing touches on a new studio album. Speaking at last weekend's Wacken Open Air, he said: "We had a bit of a hassle because of the pandemic; we couldn't meet in the studio and all that sort of shit. So that knocked everything all to hell. If that hadn't happened, the album would be out by now. But we're just doing the fine tuning, really, and working on individual shows for now.

"VENOM have never been a big touring type of band," he explained. "We like to just pop up and blow the place to hell."

VENOM formed in 1979 in Newcastle Upon Tyne. Coming to prominence towards the end of the new wave of British heavy metal, VENOM's first two albums — "Welcome To Hell" (1981) and "Black Metal" (1982) — are considered a major influence on thrash metal and extreme metal in general. VENOM's second album proved influential enough that its title was used as the name of the extreme metal sub-genre of black metal. The band classic lineup trio of Cronos, Jeff "Mantas" Dunn and Anthony "Abaddon" Bray recorded two further studio albums, "At War With Satan" (1984) and "Possessed" (1985),and live album "Eine Kleine Nachtmusik" (1986). Often cited by bands such as METALLICA, BEHEMOTH, CELTIC FROST and MAYHEM as major influences, they are one of the most revered bands of their generation. VENOM are still fronted by original singer/bassist Cronos and headline festivals all over the globe and continue to release new music.