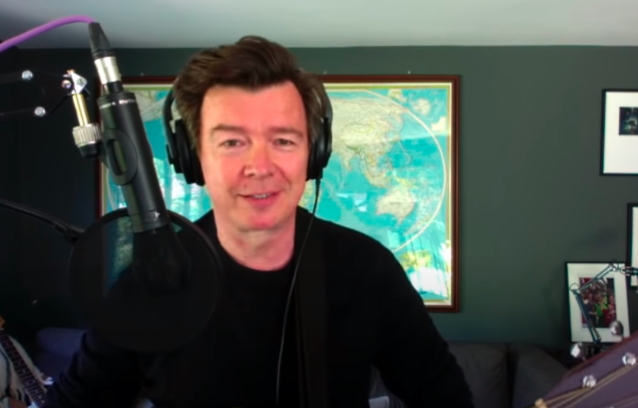 British pop singer Rick Astley, best known for his 1987 song "Never Gonna Give You Up", has recorded a cover version of FOO FIGHTERS' "Everlong".

"Sometimes you just have to find the song that's gonna lift your spirits and put you in another place, and I've been doing that a lot recently with music," Astley says in the video, before playing his take on the song. "One of the bands I always go to, believe it or not, is FOO FIGHTERS,"

Astley has shared the stage with the FOO FIGHTERS on several occasions, performing "Never Gonna Give You Up" with the Dave Grohl-fronted outfit at shows in Tokyo and London in 2017. Prior to Astley taking the stage in London, Grohl introduced the singer as "the most badass motherfucker."

Astley has released eight pop and adult contemporary albums since '87. He issued a greatest-hits compilation, titled "The Best Of Me", in 2019.

The iconic "Never Gonna Give You Up" video is used as a go-to meme online for people to bait others into clicking a link, only to be taken to the clip, a practice known as "Rick-Rolling."

The "Never Gonna Give You Up" video has been viewed more than 700 million times on YouTube since it was first uploaded in 2009.