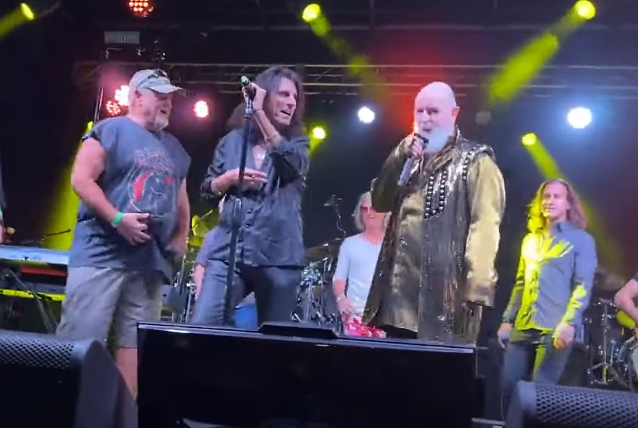 Alice Cooper, Rob Halford (JUDAS PRIEST) and Scott Stapp (CREED) are among the artists who performed on April 30 at CoopStock 2 on at Las Sendas Golf Club in Mesa, Arizona. The evening's festivities comprised a silent auction, food trucks, and live celebrity entertainment, including appearances by Larry The Cable Guy, Ed Roland of COLLECTIVE SOUL, Mike Mills of R.E.M., Danny Seraphine of CHICAGO, the comedy and music of Gary Mule Deer, SIXWIRE and Adrian Young of NO DOUBT. Proceeds from the concert benefited Alice Cooper's Solid Rock Teen Centers in Mesa and Phoenix.

Mark "Weissguy" Weiss of Rock Scene magazine has uploaded new video ofCooper, Halford, Stapp and others performing a cover version of THE DOORS classic "Roadhouse Blues" at the event. Check it out below.

The Phoenix location of Alice Cooper's The Rock Teen Center was built in partnership with Genesis Church and Cooper's Solid Rock Foundation. The 22,000-square-foot teen center, which opened in 2012, was meant to offer teens an outlet for their creativity and get them off the streets.

A year ago, the Mesa location of Alice Cooper's The Rock Teen Center opened, showcasing more than 11,000 square feet of space in partnership with Mesa Public Schools.

"Every kid out here," Alice said, "has got talent. Somewhere in you, there’s a talent that you want to get out. We invite you to come in and find your talent. It might not be music. It might be art. It might be dance. Whatever it is, you can discover it at Alice Cooper's Solid Rock Teen Centers."

Asked in a new interview with Business Jet Traveler what prompted him to start his nonprofit, the Solid Rock Foundation, in 1995, Alice said: "I saw a very awkward drug deal go down between two 16-year-old kids, and it came to me: How does that kid not know he could be the best guitar player in town? Because he never picked up a guitar. The other kid could be the best drummer. Solid Rock provides these kids a place to change their life. One of our first success stories was Jordin Sparks, who won 'American Idol'. She started with us when she was 14. It just shows the other kids you can start from nothing and become something really important."

Yes there are perks to creating magazines . Here I am at Alice Cooper's Solid Rock non-profit. So excited to see my son's favorite band in his teens. Creed. Here is Scott Stapp.. love you PJ. Naomi Chirico

Alice Cooper’s Coopstock 2 was as Advertised!! 😎👉🏼

Tickets are still on sale for Coopstock 2 on April 30th at Las Sendas Golf Club. Wear your grooviest outfits! Tickets and info at https://www.alicecoopersolidrock.com/event/rock-and-roll-bash-coopstock-2/