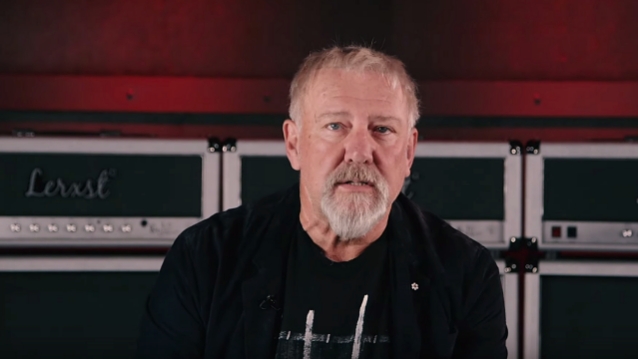 RUSH guitarist Alex Lifeson commissioned the amp gurus at Mojotone to build him a tour-worthy recreation of a legendary, 50-watt amp head from across the pond. The Lerxst Omega boasts all the same features as its silver-trimmed predecessor, including a three-band EQ, two footswitchable channels, a Rhythm Clip mode, and a serial effects loop. The Lerxst Omega is top-shelf all the way, with high-end components like Mojotone Dijon caps, Heyboer transformers, CTS pots, and JJ tubes.

Handwired in Burgaw, North Carolina, the Lerxst Omega delivers the full gamut of classic British tones. This Lerxst Omega has been hand-signed by Alex himself and includes a custom serial number plate and certificate of authenticity — and you can only get these autographed versions at Sweetwater. There's only 100 of these available, and they won't last long, so order yours today.

RUSH has been completely inactive since completing the "R40 Live" tour nearly four years ago. Drummer Neil Peart was battling enormous physical pain through much of the trek, including a foot infection that made it agonizing for him to even walk.

A few years ago, Lifeson told Rolling Stone that he receives injections for psoriatic arthritis. He was previously hospitalized for anemia from bleeding ulcers and suffered breathing problems.