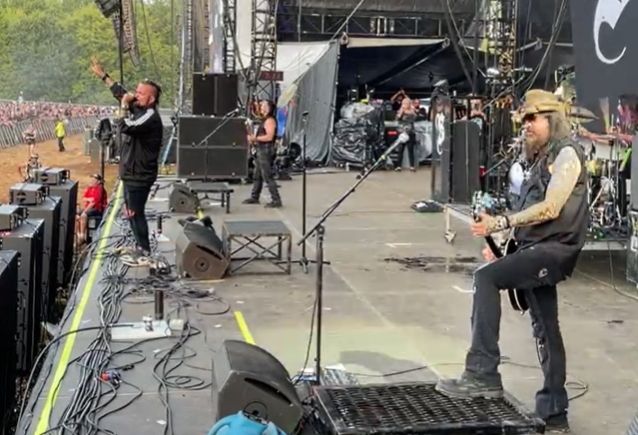 SALIVA reunited with its original singer Josey Scott for a one-off appearance earlier today (Sunday, September 11) at this year's Blue Ridge Rock Festival at the Virginia International Raceway in Alton, Virginia. Video of the performance can be seen below.

Amaru discussed Scott's failed reunion with SALIVA during a recent interview with The Bay Ragni Show. Asked if he feels any "pressure" knowing that there are still ongoing discussions about a possible reunion with Scott, Amaru said: "I'm in those discussions as well, and there's nothing shady going on; it's nothing that I don't know about. It was my idea to actually say, 'Hey, you guys should do a 20-year-reunion deal.' I was an advocate for that. Wayne Swinny will tell you that. I was the one that was, like, 'I think you guys should.' And I think a lot of things just didn't pan out last year with… They couldn't get on the same page, and then Josey lost his son. It was just not a good year for anything like that."

Amaru also confirmed that both he and Scott would front SALIVA at Blue Ridge Rock Festival. "[It's] gonna be fucking awesome," the singer said. "And I'll be there. We'll both be there. It's gonna be great. It's good for the fans.