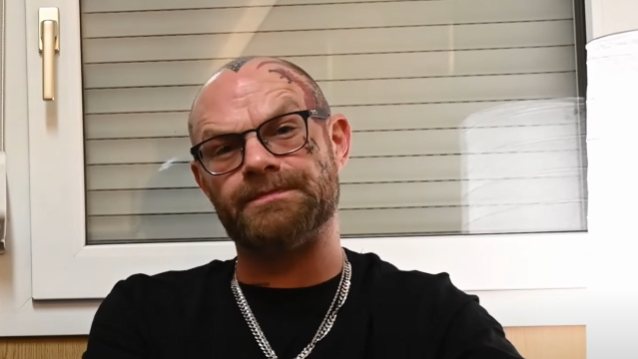 FIVE FINGER DEATH PUNCH's IVAN MOODY Is Optimistic About The State Of The World: 'I Have To Be; I Have Children'

Minutes before FIVE FINGER DEATH PUNCH's July 3 appearance at the Hills Of Rock festival in Sofia, Bulgaria, singer Ivan Moody was interviewed for an episode of "Elena Rosberg Presents: Personalities And Passions!" Asked if he feels a connection to the European mentality and state of mind, Ivan said (as transcribed by BLABBERMOUTH.NET): "Absolutely. Especially with what's going on in the world right now. I won't get too political on this, but for me, the idea that you look at music as universal — it's very artistic. It's bigger than religion in some ways; it's bigger than politics; it supersedes all of it. The connection of music between you and the culture out here [in Europe], it's just a different — it's a different world. I love it. In America, it's a lot about, 'What have you done for me lately? Have you put out another single? No? When's the new one coming out? I've heard that one 30 times. I want the next one.' And I hate that shit, because you don't get a chance to love your own stuff."

He continued: "I've seen W.A.S.P. out here, or Alice Cooper — JUDAS PRIEST, of course. Rob Halford — there's one of my favorites. And they're playing music that they wrote 40 years ago. And it's still just as good. And it's looked at that way out here [in Europe], where out there [in America] — not so much. And that's disappointing."

Asked if he is optimistic about the world we're living in, Ivan said: "I have to be. I have children. Listen, before I had kids, I would have been the first one to pour the gas on it and light the match. But the reality is having children has opened my soul to an idea, and that idea is that there's something bigger and better waiting, and we'll eventually get there, no matter how hard the trials may be. But I have to [be optimistic], because if I don't, then I'm giving my kids false hope. And I don't think any parents wants to do that. I know for damn sure I don't."

FIVE FINGER DEATH PUNCH's ninth album, "AfterLife", was released last month. The "Afterlife" title track, which was made available as a single in April, recently gave FIVE FINGER DEATH PUNCH the most consecutive No. 1s on Billboard's Mainstream Rock Airplay chart. The song was the band's 13th total No. 1 and eighth entry on the chart in a row.

"AfterLife" is FIVE FINGER DEATH PUNCH's first album with its latest addition, renowned British virtuoso Andy James, who replaced Jason Hook in 2020. James was previously featured on "Broken World", a song that was included on the second installment of FIVE FINGER DEATH PUNCH's greatest-hits collection, "A Decade Of Destruction – Volume 2", which came out in the fall of 2020.

Last month, FIVE FINGER DEATH PUNCH launched a U.S. headlining tour presented by Live Nation. The trek kicked off in Ridgefield, Washington on August 19 and will span over 30 dates, closing out on October 15 in Salt Lake City, Utah. The band is joined on tour by rock icons MEGADETH, with additional support from THE HU and FIRE FROM THE GODS.