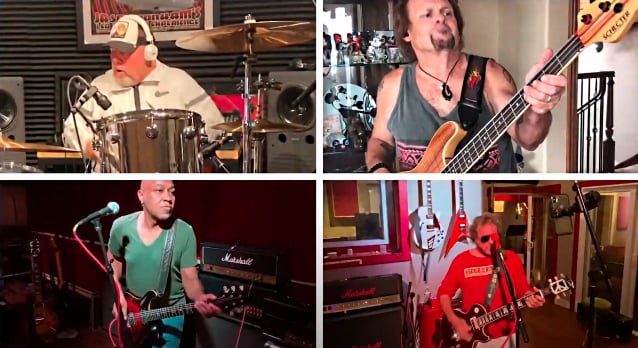 Sammy Hagar and his CIRCLE bandmates have once again teamed up via the Internet to record music.

After previously connecting via their smartphones from four separate locations to lay down a brand new song titled "Funky Feng Shui", as well as covers of THE WHO's "Won't Get Fooled Again", VAN HALEN's "Good Enough", BOB MARLEY & THE WAILERS' "Three Little Birds", BUFFALO SPRINGFIELD's "For What It's Worth", Little Richard's "Keep A-Knockin'" and AC/DC's "Whole Lotta Rosie", among others, they have now regrouped — in a virtual sense — to cover SAMMY HAGAR AND THE WABORITAS' "Sympathy For The Human". Check out video of the performance below.

Hagar said: "This song has always been one of my favorite's from the WABO era. Whenever we started a show with this song it always ended up being a great one. Sympathy for the Human — ain't it the truth."