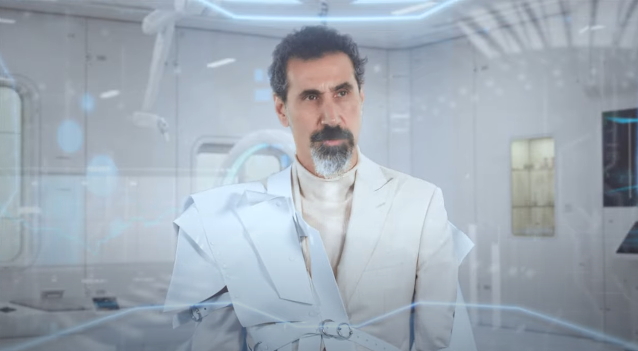 Virtuoso cellist Tina Guo has unleashed her full-length album, "Dies Irae", via Sony Music Masterworks. Leading up to today's album drop, Tina has previously released tracks "Moonlight Sonata", "Toccata And Fugue" and "Adagio" by Albinoni. In celebration of "Dies Irae", Tina has also released the dreamily futuristic music video for her original track "Moonhearts In Space", featuring vocals from none other than the inimitable musician, songwriter, producer, and political activist Serj Tankian of SYSTEM OF A DOWN.

Speaking on today's release, Guo shares: "I am SO excited for the 'Dies Irae' album release after three years in the making, and to share the 'Moonhearts In Space' song and video with everyone!

"I have been a huge fan of Serj for so many years and it really was a dream come true to be able to collaborate together. A huge preemptive thank you to everyone for taking the time out of your day to listen and watch, the amazing support and positivity over the years has been an incredible blessing and I'm so grateful for you!"

Tankian commented: "I really enjoyed working with Tina on 'Moonhearts In Space'. Her ability to take classical and destroy it with rock and metal is really enjoyable. At a time when we are already traveling to space, it's imperative to realize the intention with which we travel inwardly or out."

Furthermore, metal fans can also spot Tina in SABATON's latest music video, "Steel Commanders". The clip was released in tandem for the "Spirit Of War" in-game event in World Of Tanks.

Guo has reimagined and reinvigorated classical music as a cellist, composer, artist, and performer. The Grammy Award-nominated and BRIT Female "Artist Of The Year" Award-nominated cellist stands out as the rare talent who can bring an outdoor festival crowd to its feet or ignite the score of a record-breaking blockbuster. As a soloist, her cello courses through the soundtracks for "Wonder Woman", "The Lion King", "Inception", "Dunkirk", "Pirates Of The Caribbean 5", "X-Men Dark Phoenix", "Iron Man 2", "Cyberpunk 2077", "Call Of Duty: Black Ops 2, 3, & 4", "League Of Legends, "Assassin's Creed Syndicate", "CSI: NY", "The Vikings", and most recently the sci-fi blockbuster "Dune", to name a few.

She has accompanied Hans Zimmer, Steven Tyler, Skrillex, Joe Bonamassa, FOO FIGHTERS, Al Di Meola, and Carlos Santana on stage and John Legend, Ciara and many more on tape. She thrived in the spotlight on Cirque Du Soleil's Michael Jackson "The Immortal" world tour, which entertained 3.7 million-plus concertgoers in packed arenas and became one of the highest-grossing tours of all time. Not to mention, she lit up the sold-out League Of Legends world championship at the Staples Center streamed over 33 million times. Along the way, she also picked up 53 million YouTube views, 374,000 subscribers, and 40 million Spotify streams to date.