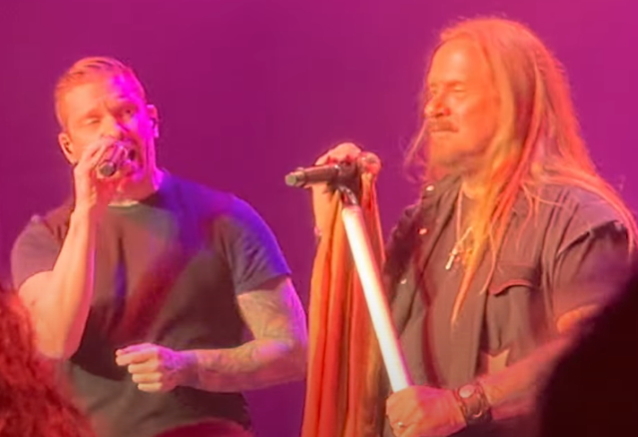 SHINEDOWN's Brent Smith joined LYNYRD SKYNYRD on stage this past Sunday (November 13) at the Ryman Auditorium in Nashville, Tennessee to perform the classic LYNYRD SKYNYRD song "Simple Man". Fan-filmed video of his appearance can be seen below.

SHINEDOWN recorded a cover of "Simple Man" in 2004 as an acoustic "thank you" to LYNYRD SKYNYRD singer Ronnie Van Zant's widow Judy Van Zant and later included it — in both acoustic and hard rock versions — on the re-release of the band's debut album, "Leave A Whisper".

In introducing Smith to the stage at the Nashville concert, LYNYRD SKYNYRD lead singer Johnny Van Zant said: "This next guest, these guys, his band, they're from Jacksonville, Florida, by the way — where LYNYRD SKYNYRD's from. And they did this song so great. When we were thinking about doing this show, I said, 'Man, we'd love to have him.' Y'all give it up for our good buddy… Y'all give it up for Mr. Smith from SHINEDOWN."

On Tuesday (November 15),Brent shared a photo of his performance with LYNYRD SKYNYRD, and he included the following message: "Still trying to process this moment… Thank you @skynyrd and @johnnyroyvanzant for allowing me to be a part of this extraordinary event!!! GOD BLESS #LynyrdSkynyrd GOD BLESS the #simpleman and #woman".

Smith previously spoke about how SHINEDOWN's cover of "Simple Man" came about in an interview with Metal Hammer magazine. He said: "Our original guitar player, Jasin Todd, was married to Melody Van Zant [Ronnie Van Zant's daughter]. When I was writing 'Leave A Whisper', Judy [Van Zant, Ronnie's widow] put me up in her guesthouse, and our first show in front of an audience there to see us was at a club Judy and Melody owned. After we started touring, we played 'Simple Man' on a radio show in Boston. They released it as an MP3 and it got downloaded 500,000 times. After that, we recorded the song in the studio in three takes."

SHINEDOWN's acclaimed new studio album, "Planet Zero", produced by the band's bassist Eric Bass, is out now via Atlantic Records. The album debuted in the Top 5 on the Billboard 200 chart and the official U.K. albums chart, and at No. 1 on six other Billboard charts, including Top Album Sales, Rock, Hard Rock and Alternative Albums.

Led by tracks like "Daylight" and title track "Planet Zero", the album's searing social commentary boldly confronts the societal forces that perpetuate divisiveness while offering a restorative path forward through empathy and open conversation — ultimately serving as a reminder that it is our human connections that matter the most.

"Planet Zero" is the latest addition to SHINEDOWN's record-breaking catalog that has earned the band recognition for their timely and relevant messages behind their chart-topping hits that resonate with not only their global audience and the rock community, but the greater public and our culture at large.