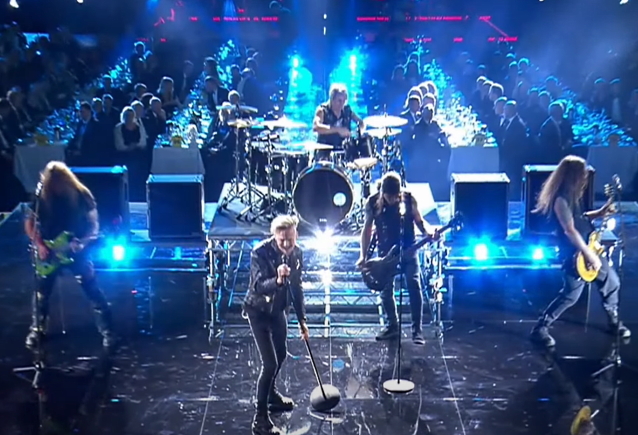 On Thursday, November 17, SKID ROW performed the song "The Gang's All Here" at Avicii Arena in Stockholm, Sweden as part of a special event celebrating 100 years of Swedish ice hockey. During the "Tidernas Hockeygala" event, Swedish ice hockey's great successes was celebrated, classic moments were revisited and the greatest heroes of hockey history were honored. In addition, a specially composed jury consisting of former players/managers as well as journalists selected prestigious awards.

SKID ROW's participation in the event was first announced by the band's Swedish-born singer Erik Grönwall on November 10 via his social media. Erik, who joined the band in January, shared a photo of SKID ROW's current lineup, and he included the following message: "These guys will be flying to Sweden to perform a song at Avicii arena on November 17th to celebrate 100 years of Swedish hockey. @officialskidrow played there with @gunsnroses back in the day and I won Swedish Idol in that same arena. Another full circle. The show will be aired live on @svt".

Grönwall went from auditioning for the competition show "Swedish Idol" back in 2009 by singing a cover of "18 And Life" to being asked to front SKID ROW earlier this year.

Erik, who was diagnosed with acute lymphoblastic leukemia in March 2021, reflected on his journey in a recent interview with 80's Metal Recycle Bin. He said: "I wouldn't call myself a religious man [laughs], but I would call myself… After all of this, I'm way more spiritual. I'm, like, 'Okay, who planned this?' I was on my way to a completely different life [before my diagnosis], but it was kind of like someone just nudged me.

"I was scrolling on Instagram a couple of days ago and I just saw a post, and it was a text saying, 'I'm sorry I had to make you uncomfortable, but I had to make you move. God.' And I was, like, 'Oh, fuck, man.' [Laughs] That's what it feels like.

"I'm not sure if everything happens for a reason, but that's the only way I can explain this — getting leukemia, then ending up in my favorite band," he continued.

"When I was on stage in [Las] Vegas [with SKID ROW in March and April], I was interacting with the audience, and I told them that, 'Do you know how amazing it feels to be here singing the song that started your career?' 'Cause '18 And Life' was the song I auditioned with for the 'Idol' show; that's what got me on 'Idol'. And I told them, 'Do you know how it feels to be here on stage with your favorite band of all time singing the song that started your career?' And someone commented on it, and it was, like, 'Did he just quote the 'Rock Star' movie script?' And I was, like, 'Yeah, I didn't even think about that, but it's that movie," he said, referencing the film in which an average kid from Pittsburgh gets tapped to be the new lead singer for his favorite heavy metal band. "So it's kind of like a movie script.

"It's just incredible," Erik added. "I'm still trying to process it. It feels like I've been in the band for two years. It's been four months. We've done, like, 30 shows in four months. We recorded an album. We started working on a new album. We recorded a music video. Everything has been happening so fast. It's overwhelming in so many ways."

Erik also credited his wife with providing him with the emotional strength and support that he needed through his ordeal.

"I wanna say my wife has been incredible this whole journey, especially during the treatments, 'cause when I was ready to give up, she was, like, 'Hey, you're not giving up now. You've got so many people that love you and need you in their lives.' She was tough," he recalled. "And I needed that. So I was, like, 'Yeah, I know.' And I can mention I also have a two-and-a-half-year-old son at home. So that was really, really tough — coming back from the hospital and seeing him. That was my weak spot. She really helped me a lot, and she's very understanding. And obviously, when you have this kind of lifestyle, you need someone who really understands that lifestyle and supports it. And it's kind of a selfish lifestyle in many ways. But she totally gets it, and she's got my back."

Grönwall, who was a member of the Swedish hard rock band H.E.A.T. for nearly a decade before exiting the group in October 2020, announced in September 2021 that he was cancer free after receiving a bone marrow transplant one month earlier.

"There's been a lot of tears, and I still get emotional now talking about this," Erik said. "I think I'm done with the crying [laughs] — I think — but somehow I feel grateful that I went through all of this, 'cause it gave me a lot of perspective. I'm 34, and I just feel like I've gotten a lot of perspective on things.

"Being in this business, you see a lot of comments, and you've gotta be tough in many ways," he explained. "And back in the H.E.A.T. days, negative comments could really get to me. Now I'm just, like, 'Dude, I don't care.'

"I'm so happy to wake up every day above ground. It's, like, 'Shit, I get another day? What am I gonna do with this day?'

"I was happy before SKID ROW," Erik added. "I am very happy in SKID ROW. Everything is temporary. I will be happy after SKID ROW. I'm just happy. I've got perspective, and I'm just happy to be alive. And I'm gonna keep singing until this voice can't sing anymore."

In September 2021, Grönwall released his new cover version of "18 And Life" via all streaming platforms.

This past January, Grönwall told Headbangers Lifestyle about beating cancer: "Some anonymous wonderful human being somewhere in the world donated his/her blood cells so that I could get a second chance at life. Sometimes I can just get tears in my eyes when I think about it. It's so beautiful that one person who is not connected to me in any way wanted to do that for me. He/she doesn't know that the blood cells were for me. It's completely anonymous."

In late March, SKID ROW released its first single with Grönwall, "The Gang's All Here". The song is the title track of the band's latest album, which arrived on October 14 via earMUSIC.