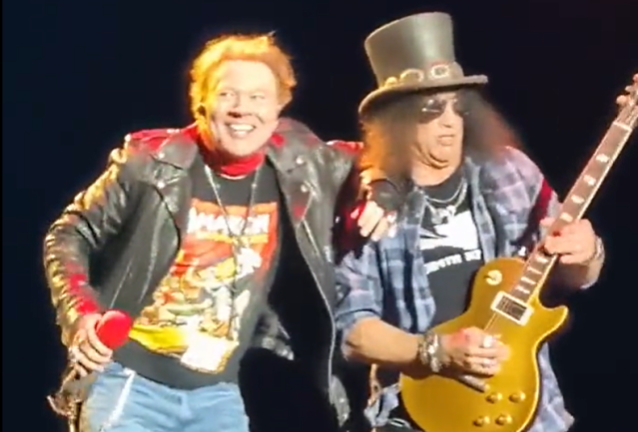 A short video of Slash accidentally bumping into Axl Rose during GUNS N' ROSES' September 18 concert in Florianópolis, Brazil can be seen below. In the eight-second clip, the guitarist can be seen walking backward at Hard Rock Live while performing the GN'R song "Estranged" and colliding with Rose, who was singing the track while positioned center stage at Hard Rock Live. The vocalist is visibly amused by the incident and flashes a huge smile before placing his left elbow on Slash's right shoulder and continuing to sing the song.

GUNS N' ROSES is touring South America in September and October. In addition to Brazil, the legendary rock band is visiting Argentina, Uruguay, Chile, Peru, and Colombia, before going north to Mexico, and then traveling to Asia.

GUNS N' ROSES reportedly arrived in Manaus on August 29, after departing from Los Angeles International Airport (LAX) and having a layover in San José, Costa Rica (SJO). The band had its first concert, in Manaus, on September 1, at the Arena da Amazonia. On September 2, following the show at Manaus, GUNS N' ROSES played in Recife on September 4. A day after, they traveled to Rio De Janeiro where they headlined the Rock In Rio festival. After that, the band played in Goiânia, Belo Horizonte, Ribeirao, Florianópolis and Curitiba. GUNS N' ROSES will now perform in São Paulo and Porto Alegre, before flying to Buenos Aires, Argentina. 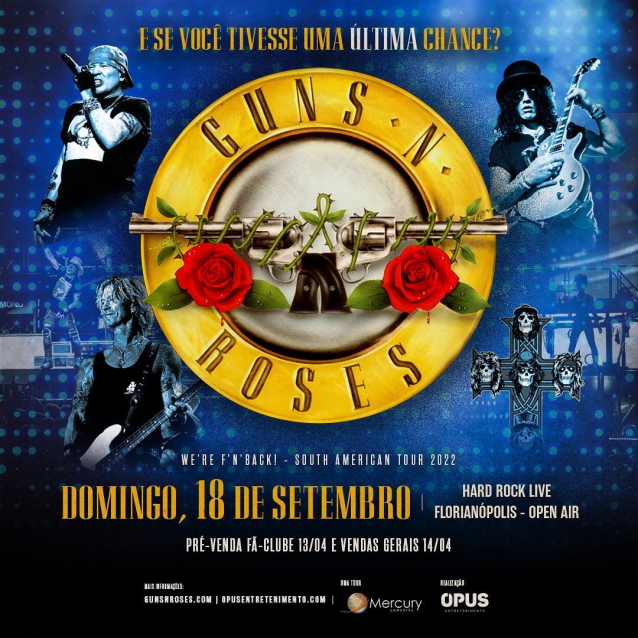