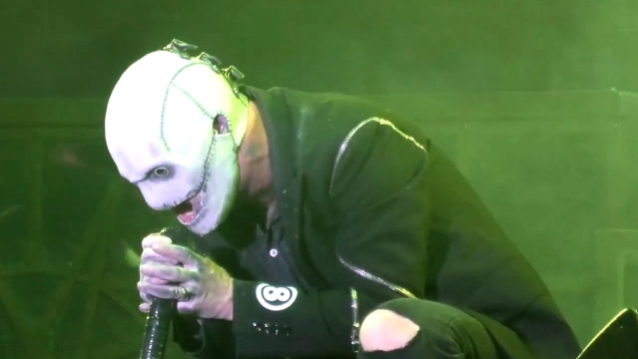 SLIPKNOT kicked off its summer 2022 European tour last night (Wednesday, July 20) at Romexpo in Bucharest, Romania. Support on the trek is coming from JINJER and VENDED, the band fronted by Griffin Taylor, son of SLIPKNOT singer Corey Taylor.

SLIPKNOT's setlist was as follows:

Fan-filmed video can be seen below (courtesy of Bahomar).

SLIPKNOT will release its new album, "The End, So Far", on September 30 via Roadrunner. The official music video for the LP's new single, "The Dying Song (Time To Sing)", was directed by the band's own M. Shawn "Clown" Crahan.

Produced by SLIPKNOT and Joe Barresi, "The End, So Far" is available for pre-order with several vinyl variants at Slipknot1.com. "The End, So Far" includes the band's 2021 surprise single "The Chapeltown Rag" and follows 2019's "We Are Not Your Kind", which marked SLIPKNOT's third consecutive No. 1 on the Billboard 200. The release made a massive global impact with No. 1 debuts in the official album charts of twelve countries around the world, including the U.K., Australia, Canada and Mexico, with Top 5 debuts in an additional twelve countries including Germany, France and Sweden.

In February, Corey told SiriusXM's "Trunk Nation With Eddie Trunk" about the musical direction of the new SLIPKNOT material: "It's really killer, man. It's darker than 'We Are Not Your Kind', but there's a ton of melody. I've been telling everybody that it's like a heavier version of 'Vol. 3[: (The Subliminal Verses)]'. It's got so many textures and layers. The heavy stuff has attack but the melodic stuff you can just sink your teeth in; there's a lot of great melodies and hooks. I'm really, really excited for people to hear it."