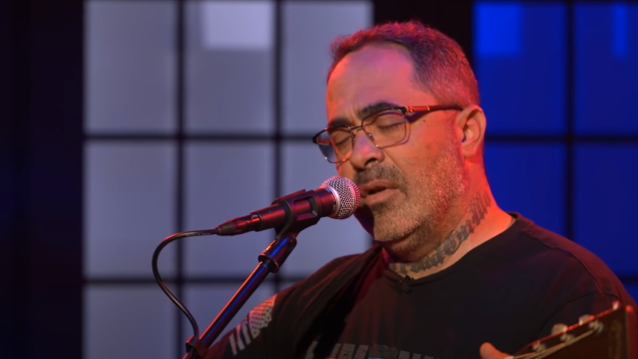 Watch STAIND's AARON LEWIS Perform Controversial New Single, 'Am I The Only One', On 'Candace' Show

STAIND frontman Aaron Lewis performed his controversial new solo single, "Am I The Only One", on The Daily Wire's "Candace" show. You can now watch video of his appearance below.

According to Billboard, "Am I The Only One" bowed at No. 14 on the Billboard Hot 100 chart after posting blockbuster first-week sales of 59,300. The track, which Lewis wrote with Ira Dean and Jeffrey Steele, also topped Billboard's airplay-, sales- and streaming-based Hot Country Songs chart (dated July 17). It opened atop Country Digital Song Sales and at No. 2 on the all-genre Digital Song Sales ranking. "Am I The Only One" also drew 4 million U.S. streams in the tracking week.

Last month, Lewis made headlines when he accused the U.S. Democratic Party of fighting against every major civil rights initiative and of having a long history of discrimination.