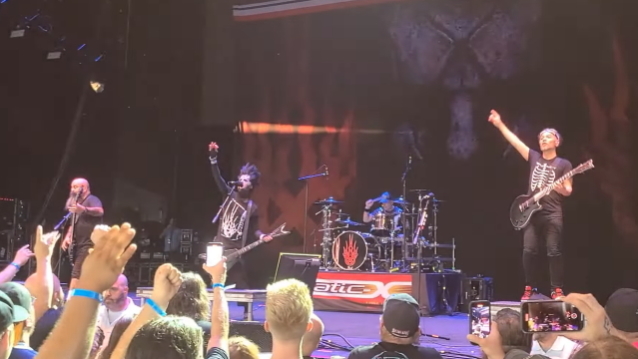 Fan-filmed video of STATIC-X's entire July 30 performance at Xfinity Center in Mansfield, Massachusetts as the support act for ROB ZOMBIE and MUDVAYNE on the "Freaks On Parade" tour can be seen below.

This past January, STATIC-X postponed its "Rise Of The Machine" North American tour featuring FEAR FACTORY, DOPE, MUSHROOMHEAD and TWIZTID. The trek, produced by Live Nation, was rescheduled due to the increase in the spread of COVID-19 and its continued effect on travel restrictions, public health, and fan safety. The 42-date trek will now kick off February 25, 2023, in San Francisco, California and wrap up April 15, 2023 in Los Angeles, California.

The 20th-anniversary release of "Machine" — made available on February 18, 2022 — features newly remastered audio by Ulrich Wild and includes all 12 tracks from the original release, as well as three new bonus tracks: "Wisconsin Death Trip (Live 2019 Regeneration Featuring Wayne Static)" , "Sweat Of The Bud (Live 2019 Xer0)" and "I'm With Stupid (Live 2019 Regeneration Featuring Wayne Static)". Originally released in 2001, "Machine" would ultimately turn out to be the last album recorded by the four original members of STATIC-X. All of the lead vocals and guitars on "Machine" were performed by Wayne Static, while bass, backing vocals, drums, and programming contributions came from founding members Tony Campos, Ken Jay and Koichi Fukuda. The limited-edition release will have packaging featuring fully reimagined artwork and will be available in multiple configurations, including multiple color vinyl sequenced on two discs, with an etching of the STATIC-X Shock symbol on side D.

STATIC-X's latest album "Project Regeneration Vol. 1", came out in July 2020. The first of two volumes, it features 12 brand new tracks, containing many of the final vocal performances and musical compositions of late STATIC-X frontman Wayne Static, along with the original "Wisconsin Death Trip" lineup of bassist Campos, Jay, and guitarist Fukuda. Both volumes are being worked on by longtime STATIC-X producer Ulrich Wild.

While the identity of STATIC-X's touring singer — who goes by the name Xer0 — has not been officially revealed, strong rumors suggest that DOPE frontman Edsel Dope is performing alongside Campos, Jay and Fukuda.

Campos discussed STATIC-X's comeback during an appearance on "The SDR Show". Speaking about how the idea of Xer0 wearing a mask in the likeness of Static came about, Tony said: "When we were trying to figure out how we were gonna do this live, the first thing that came up was the hologram thing, and that got shot down pretty quick.

Asked if STATIC-X is still keeping Xer0's identity a secret even though "everyone knows" who he is, Tony said: "Yeah, but I still like to keep that distinction, 'cause, again, I'm trying to keep the focus [on remembering Wayne]." 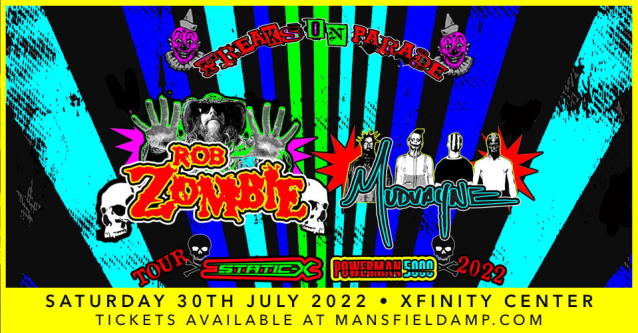