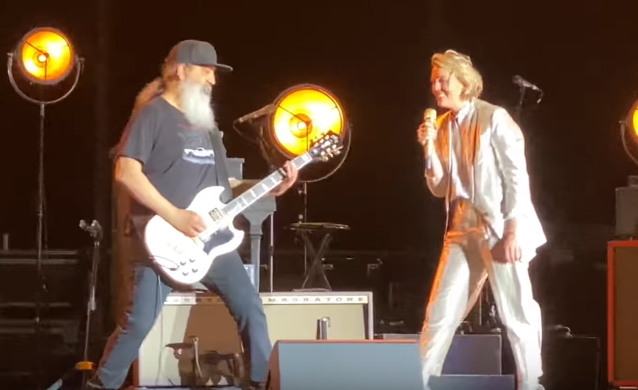 Surviving SOUNDGARDEN members performed two of the band's classic songs with Brandi Carlile over the weekend.

Kim Thayil, Matt Cameron and Ben Shepherd joined Carlile onstage during her concert on Saturday, August 14 at the Gorge Amphitheatre in in George, Washington to play "Searching With My Good Eye Closed" and "Black Hole Sun".

"I'm so stoked right now," Carlile said before launching into "Black Hole Sun" in front of a crowd of around 15,000.

Carlile previously hooked up with the three musicians at the 2019 "I Am The Highway" Chris Cornell tribute concert in Los Angeles. She was also joined by Thayil, Cameron and Shepherd for the recording of studio versions of "Black Hole Sun" and "Searching With My Good Eye Closed" for a Record Store Day 2020 release.

Thayil added: "I assume that Brandi chose to record 'Searching With My Good Eye Closed' because it's a beautiful song that is accommodating of her vocal style. I'm really happy that she chose this song, because her interpretation is absolutely amazing. It's beautifully emotive, floating and trippy. Her version sent shivers down my spine."

Early last year, Carlile wrote about recording her early demos at London Bridge with her band, saying, "SOUNDGARDEN were just gods to us back then. Total pioneers and unreachable to us in every way. We went about making our demos and cleaning the studio when we couldn't afford the bill never knowing that in November of 2019 we would go back to London Bridge and RECORD TWO SONGS WITH THEM!! [Chris Cornell] was as great as a human singer can get and now he's an angel. Thank you Kim, Ben, and Matt. I'll never forget this day for as long as I live."