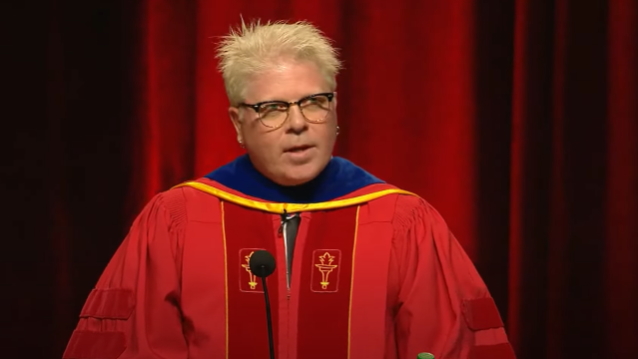 THE OFFSPRING singer Bryan "Dexter" Holland delivered the commencement address at one of the commencement ceremonies at the Keck School of Medicine at the University of Southern California in Los Angeles, California, speaking to PhD, MPH, and MS graduate students on May 14.

A USC PhD graduate who performed his research at the Keck School of Medicine, Holland said in his commencement speech: "My story has had both a musical side and a scientific side. I had these two great loves, how would I decide? Well as foolish as it sounds I decided to pursue both. I believe that there's an intersection between art and science. And that even in our scientific field we draw upon our creativity."

One of his most creative moments was inspired in a lab at USC. Working with flasks and trying to cool them down, he realized, "You gotta keep 'em separated," which also happens to be the lyrics of one of THE OFFSPRING's most popular songs.

In nature there are no straight lines, he said. Just like his scientific journey. While he paused his academic career to be a rock and roll artist, he eventually came back to finish his thesis and graduate with his PhD. And the coronavirus pandemic also changed many people’s paths from a linear one, to a much more complicated journey.

"You did it, and no other class ever had to do that," Holland said. "And you did it at a time when many people have lost their faith in science, and trust in the scientific community as a whole has been challenged."

Holland, who has a Ph.D. in molecular biology and wrote his thesis on microRNA in HIV genomes, believes that science is a hunch followed by passion.

"You follow that hunch because you believe that there's something out there to discover that you don’t know yet, something that maybe no one else in the world knows yet, or has ever known," he said. "And here at USC you learn to take that hunch, the notion of what could be the truth and combine it with your unwavering passion to find that truth. And your perseverance is what has brought you here today… It's not the end of your learning, but a marker of the sacrifice and commitment to the continued pursuit of the truth. Today we will celebrate what generations will remember as the class that did the impossible."

Holland had received his Ph.D. from University of Southern California in 2017. The title of his dissertation was "Discovery of Mature MicroRNA Sequences within the Protein-Coding Regions of Global HIV-1 Genomes: Predictions of Novel Mechanisms for Viral Infection and Pathogenicity."

In May 2021, Holland spoke to Tom Power, host of "Q" on Canada's CBC Radio One, about THE OFFSPRING's decision to encourage fans to receive their COVID-19 vaccines by reworking the chorus of their 1994 classic "Come Out And Play" to say "you gotta go get vaccinated." The new version of the song was shared in March 2021 on THE OFFSPRING's Instagram, featuring a snippet from the song's music video with the reworked lyrics.

Holland said: "I went to school for this. I feel like I have a little bit of a background in it, and I do think it's a good idea [to get the COVID-19 vaccine]. And whatever you think about all this, the truth is that we're not gonna get back to normal until people get vaccinated; that's just the reality of it. So why don't we just get this done with so that we can all go to shows again and do the things that we love to do. That was kind of the reasoning behind it. And I do feel like it's the right thing to do. I felt strongly enough to put this out."

Although the COVID-19 vaccine was produced quickly because of the urgency of the health crisis and the number of clinical trial volunteers, Holland said the vaccine was not rushed, and it relied on years of research.