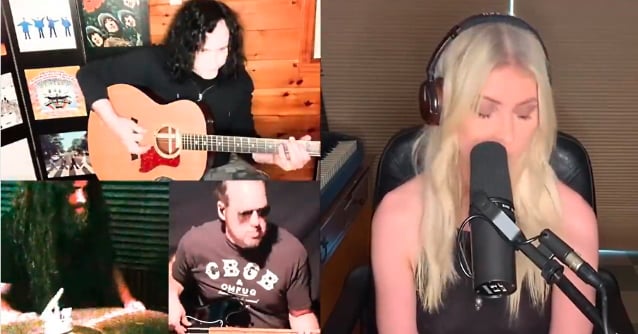 THE PRETTY RECKLESS performed a quarantine acoustic version of "Death By Rock And Roll", the title track of the band's forthcoming album, during a June 18 iHeartRadio Facebook Live session. You can now watch it below. The LP will be released via Fearless Records in the U.S. and Century Media Records in the rest of the world.

"Death By Rock And Roll", the fourth studio album from THE PRETTY RECKLESS, will arrive in late 2020 or early 2021.

Since forming in 2009, THE PRETTY RECKLESS has quietly made history. The group's 2010 debut, "Light Me Up", ignited this rise. It was 2014's "Going To Hell", however, that set the whole genre ablaze. It debuted in the Top 5 of the Billboard Top 200, spawning three No. 1 hits — the gold-certified "Heaven Knows" (the biggest rock song of 2014),"Fucked Up World" and "Follow Me Down" — a feat that had not been accomplished by a female-fronted group since THE PRETENDERS in 1984. Their third opus, "Who You Selling For", boasted a diverse set of standout tracks, including "Oh My God", "Back To The River" and "Take Me Down". It also garnered praise from Vogue, Nylon and Billboard. Along the way, the group toured with the likes of SOUNDGARDEN and GUNS N' ROSES and tallied half-a-billion streams.

THE PRETTY RECKLESS is managed by David Sonenberg and Erica Ramon for DAS Communications Ltd.

We will be live at 4PM ET with an exclusive performance of "Death By Rock and Roll," the new single from The Pretty Reckless plus an in-depth interview with lead singer, Taylor Momsen.